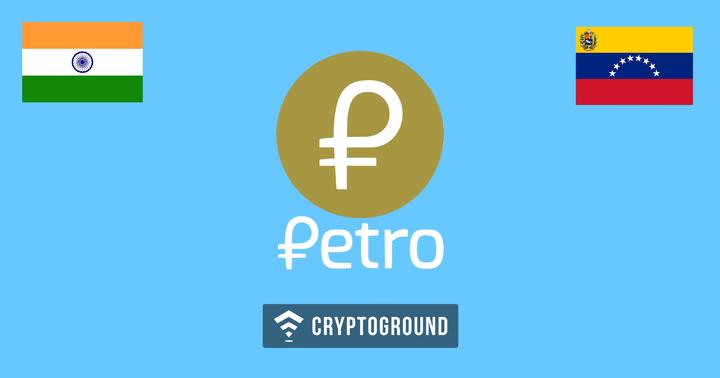 Venezuela is a nation in trouble - having several economic sanctions imposed upon them by the US and several other nations - the country continues to struggle to stabilize their economy. Of late, the government of Venezuela has been considering cryptocurrencies to help them out of this financial mess. The state-backed Petro cryptocurrency has been their last ray of hope amid these sanctions.

Oil Diplomacy has been a concept which has been around for a really long time. Oil, considered as the ‘black gold’ is the very source of power which helps industries thrive - which helps transportation - and much more. Practically every aspect of a modern-day lifestyle is heavily dependent upon oil. Venezuela isn’t the only country which is making use of cryptocurrencies to raise funds because they are facing international sanctions. In the past, North Korea too - had tried this approach and made use of cryptocurrencies to fund their nuclear program.

India has been a nation where growing prices of oil have been a major cause of concern for the government as well as the people. It has become a major political issue as well. Getting a 30% discount on crude oil would significantly lower the prices of oil - therefore lowering the prices of products which come from industries which are dependent upon oil! However, the only condition here would be that the government would have to buy this crude oil by paying them in Petro.

Last month, Venezuela sent in a team of experts from their blockchain department to visit India and to understand the scenario in the nation. These experts have been in touch with various names which operate in the private sector in India. Venezuelan officials have entered into an agreement with Indian cryptocurrency exchange Coinsecure to sell Petro in India.

“They are going to different countries and making offers. The offer that they have given to the Indian government is: you buy Petro and we will give you a 30 per cent discount on oil purchases,” Coinsecure CEO Mohit Kalra said.

Reports from Business Standard show that India’s oil imports from Venezuela averaged around 300,000 barrels per day (bpd) between November 2017 and February 2018.

However, these plans from Venezuela might just be dead on arrival. Of late, the Indian cryptocurrency markets have been in a bit of a turmoil. The Indian government, which is highly supportive of the blockchain technology, isn’t too keen on developing the cryptocurrency tech in the country. The country’s apex banking authority has instructed all financial bodies to not deal with those individuals and organizations which are dealing in cryptocurrencies - imposing an indirect ban on crypto trade in India.

To add to Venezuela’s woes, Delhi-based Coinsecure, which they teamed up with to sell Petro has itself been caught in a major controversy. Coinsecure lost over 438 Bitcoins, allegedly in an inside job earlier this month. The exchange has now been trying to provide refunds to those who had stored their Bitcoins with them - and is in a major legal trouble. As of this moment, it is uncertain if Venezuelan authorities have found a new partner in India.

Petro, for those who may be unaware - is an oil-backed cryptocurrency. Considering that Venezuela has the world’s largest reserve of oil barrels - 300 Billion of them - this might just be the safest cryptocurrency in the world. The Petro ICO was held earlier this year - where it is reported to have raised as much as $3.8 Billion with as many as 127 countries expressing interest. The currency is yet to officially launch - it will be launched after the Presidential elections in the nation - i.e. after the 20th of May.