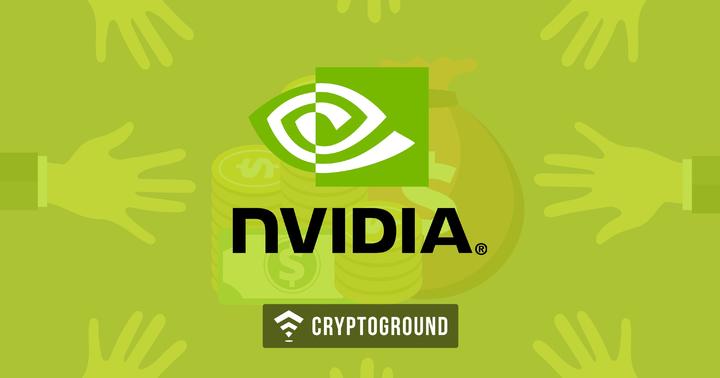 Nvidia is the biggest name when it comes to GPU manufacturing across the world. The company has been a leading name in the world of gaming - and more recently - in cryptocurrency mining. The company has recorded strong profits in Q1 2018, as disclosed by their latest earning call - a significant chunk of this profit came because of GPUs being used for cryptocurrency mining.

Nvidia, which had estimated a revenue of $2.89 Billion recorded a revenue of $3.21 Billion! Out of these $3.21 Billion, $289 Million came from sales to those involved in cryptocurrency mining. This number too is more than what Nvidia had targeted. The company had expected miners to account for about $200 Million - but they brought in almost 50% more revenue than Nvidia’s expectations. Sales to cryptocurrency miners accounted for 9% of Nvidia’s quarterly profits.

These are huge numbers for the company as the profits of Q1 2018 are up by 145% when compared with Q1 2017. In the same quarter last year, Nvidia’s revenue was $507 Million. Colette Kress, Nvidia CFO commented that:

"Cryptocurrency demand was again stronger than expected, but we were able to fulfil most of it with crypto-specific GPUs, which are included in our OEM business at $289 million. As a result, we could protect the vast majority of our limited gaming GPU supply for use by gamers. Looking into Q2, we expect crypto-specific revenue to be about one-third of its Q1 level.”

Nvidia vs AMD vs Bitmain

Reportedly, a significant bulk of the $289 Million sales were made to those who wanted GPUs to mine Ethereum. However - this revenue is expected to take a hit over the coming months as Bitmain has now introduced an ASIC miner for Ethereum - which is faster and more powerful - and might ultimately put GPU mining to rest. The same has happened with Bitcoins in the past as ASIC mining now completely dominates the Bitcoin mining business.

Bitmain’s Antminer E3 is the first ever ASIC miner for Ethereum. There has been an unrest in the Ethereum community over this news - and various methods are being planned to improve the ASIC resistance of the algorithm. Moreover, Bitmain continues to expand its offering as it has introduced ASIC miners for Monero and Zcash as well - which were GPU-only so far.

Nvidia and Bitmain are unlikely rivals - but it appears that Bitmain has a significant lead over Nvidia. Last year, Bitmain recorded $4 Billion in operating profit as opposed to $3 Billion made by Nvidia. Jensen Huang, the CEO of Nvidia, commented:

“The reason why they bought [GPU cards] is for gaming, but while they are not gaming; while they are at school, at work, or in bed — they will turn it on and do a little mining. There’s nothing wrong with that.”

While Nvidia may be placed second when compared to Bitmain, the company ranks higher than its primary rival in GPU manufacturing, AMD. AMD’s Q1 2018 revenues were of $1.65 Billion - out of which $165 million came from GPUs sold to cryptocurrency miners - making 10% of AMD’s total revenue. However, both AMD and Nvidia expect mining revenue to fall over the months to follow - due to rising competition as well as lack of interest in mining.