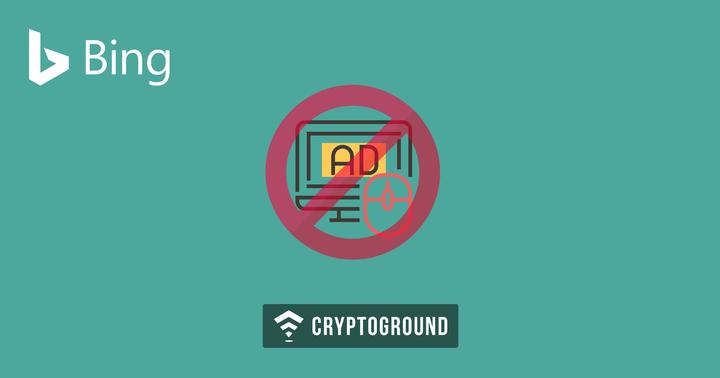 Over the past few months, a number of social media and search platforms have been declaring a ban on cryptocurrency advertising. The latest name to join this ban against crypto-ads is that of Microsoft Bing - the second largest search engine on the planet! This decision was announced yesterday and the company stated that this ban will go into effect from July 2018.

Bing has stated that the decision has been made keeping in mind the fact that cryptocurrencies and cryptocurrency related products continue to operate unregulated - and can be potentially damaging for investors. In a blog post, the company stated that they keep evaluating and updating their advertising standards from time to time - and it now appears that cryptocurrency related advertisements pose a ‘possible elevated risk’. Bing stated the reason to ban these ads as:

“Because cryptocurrency and related products are not regulated, we have found them to present a possible elevated risk to our users with the potential for bad actors to participate in predatory behaviors, or otherwise scam consumers.”

Bing’s cryptocurrency advertising ban will cover ‘cryptocurrency, cryptocurrency related products, and un-regulated binary options’ as per the company’s blog post. Bing has announced that they will enforce this ban globally - and will update their ad policies in June. The ban will begin going into effect from late June to early July.

While Facebook. Twitter, Google and Mailchimp had announced their cryptocurrency bans earlier this year - Microsoft’s Bing and LinkedIn were yet to announce any such policies. Bing, the second largest search engine in the world after Google, has now decided to enforce this ban. Microsoft Bing is late to the party - but as they say, better late than never!

While search engines and social media platforms are banning cryptocurrency advertisements, it appears that the people leading them hold a favourable opinion towards cryptos. Mark Zuckerberg - the founder of Facebook has been quite optimistic about cryptocurrencies - as Facebook sets up a blockchain division and even plans to start off with their own cryptocurrency! Twitter’s Jack Dorsey is a believer in cryptocurrencies as well and is an investor in the Lightning Network.

Interestingly, in a statement in late April, LinkedIn co-founder Eric Ly had stated that he finds this ban on cryptocurrencies ads to be temporary - but LinkedIn may announce this ban in the near future. While Microsoft may not be too keen on the crypto-technology, the company is certainly exploring the blockchain tech these days.