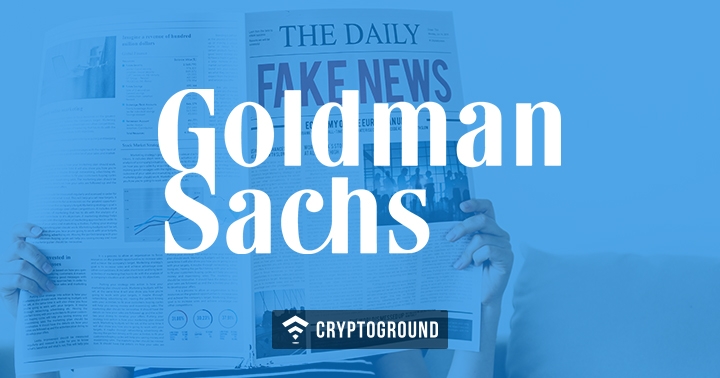 The CFO of Goldman Sachs Marty Chavez has said that the recent reports about the company dropping its plans to open a cryptocurrency trading desk are “fake news".  Speaking at a TechCrunch Disrupt conference in San Francisco, Chavez said:

“I was in New York yesterday and I was co-chairing our risk committee, and I saw the news article. It wasn’t like we announced anything or that anything had changed for us… I never thought I’d hear myself actually use this term, but I’d really have to describe that as fake news.”

Earlier this week, Business Insider reported that unnamed sources said the firm is scrapping crypto trading desk plans due to an unclear regulatory environment in the crypto industry.  The investment banking giant had first confirmed its plans for such a desk in May of this year.

Chavez further said at the conference that the bank is still considering how to offer services that involved physical Bitcoin, but that it has not yet set a timeline for it. “Our institutional clients said, ‘We would love for you to clear these new Bitcoin-linked futures contracts offered by the exchanges,’ so we’ve been doing that, and then clients since May [started to ask], ‘We would like for you also to provide us liquidity and trade the principal as principal the futures contracts, not just clear them,’ and so we’ve been doing that, the next stage of the exploration, what we call ‘non-deliverable forwards.’

“These are derivatives, over the counter derivatives,” he continued. “They’re settled in U.S. dollars and the reference price is the Bitcoin U.S. dollar price established by a set of exchanges, the same one that’s referenced in the futures contracts, and we’re working on that now because the clients wanted physical Bitcoin — something tremendously interesting and tremendously challenging. From the perspective of custody, we don’t yet see an institutional grade custody cases custodian solution for Bitcoin.”

Bitcoin and other cryptocurrencies plunged this week due to reports of Goldman Sachs aborting its plans, as it signaled a weakening of institutional support. The Chavez's clarification may have helped the cryptocurrency market as all the indicators have now turned green, though it may take some time for coins such as Bitcoin and Ether to regain the losses they made this week.