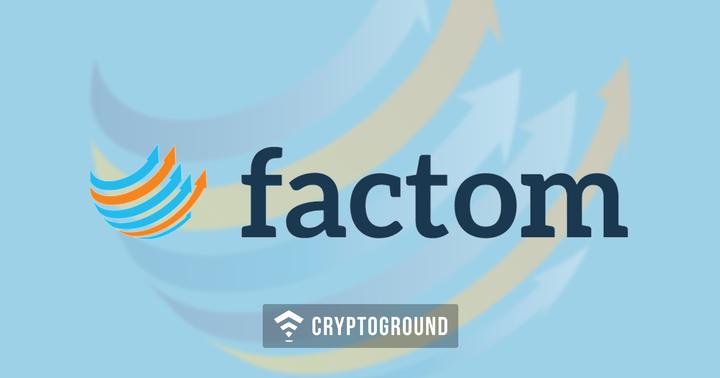 First-class analytics can only occur with quality data. As the old saying goes, ‘garbage in and garbage out’, and it still holds correct – incorrect data is of very little usage. Data quality is therefore vital to ensure accuracy and reliability. Some analytics systems allow you to query your data without validating it, however, we only analyze validated data.

This if put of blockchain could do wonders and this is what Factom does. Factom is a distributed record-keeping system used to store huge amounts of records on the blockchain, functioning as a verification and validation layer. The fundamental concept of Factom is to separate the Data Layer (notarizations) from the Value Layer (such as the Bitcoin protocol that facilitates value transfer) thereby allowing anyone to securely notarize documents in a separate system. The Factom Blockchain is an open source project. It was built to protect data and systems. Often it is described as a publishing and auditing engine. It allows users to write data to its ledger for a small fee.  Once information has entered into the Factom Blockchain it can’t be removed.

Why was Factom built?

Factom also has built-in layers of redundant security that other blockchains do not offer. The Factom Blockchain anchors itself into the Bitcoin blockchain (and others) to take advantage of the security of Bitcoin’s hash rate. The layering effect of security ensures the immutability of its blocks.

Another feature that the Factom blockchain offers is a theme tracking capability that helps those wishing to do large volumes of transactions. This enables the ability to chain together data you care about and forget the rest of the dataset. Unlike the Bitcoin Blockchain that requires you have all of the data to prove any of the data, Factom allows you to prove your data set without needing all the data in Factom.

What makes it unique?

Factom provides a distributed mechanism to lock in data, making data confirmable and independently auditable. This simple purpose is extremely powerful when applied to business dealings and processes. Factom enables people and businesses to use a mathematically provable “notarization” service.

Factom isolates the use of a protocol from a tradeable token, through a two-tiered payment system using Factoids (FCT) and Entry Credits (EC). This to me, is a novel way to ensure business practicality, since:

In order to address these real issues, Entry Credits (EC) were created to isolate the use of Factom’s protocol from the tradeable token, since companies can purchase EC directly from Factom enterprise. EC allows companies to enter data into the protocol, and one EC allows you to enter up to 1kb of data and costs $.001 at present.

Is There a Need for Factom (FCT) Tokens?

Factom’s tokens are called Factoids, or FCT. The main reason for the existence of FCT tokens is the idea of scarcity. Anyone can input data into Factom layer since it is unbiased. In order to limit spam, scarcity has to come into play. Therefore, FCT adds a cost to the RIGHTS of putting data into the Factom protocol, as well as ensuring there’s no centralization. What do I mean by centralization? Assuming if it uses BTC instead; there must be a party that issues the RIGHT to add data into Factom protocol, and this is blatant centralization!

The interesting thing about entry credits is how they come into existence. Factoids are converted into entry credits. Entry credits are not transferable or reusable. They are a one-off token whose sole purpose is to allow data to be hashed and inserted into a private chain.

Factoids are ‘burned’ when entry credits are created. Burning means that the factoids are destroyed, thereby limiting the number of factoids in existence, at least until Milestone 3 is reached. Entry credits are also burned upon usage. So until Milestone 3 is reached the factoid supply is deflationary, that is that usage reduces the number of factoids on the market.

The theory behind this is that a large burn rate of factoids will produce a diminishing supply, and as the factoid price goes higher, the number of entry credits per factoid will increase, as the entry credit price is fixed. Should you be an investor, and once Factom usage takes off, it means that your holdings should theoretically increase in value.

Factom is most easily understood as a protocol that provides unlimited books of blank paper. Users of the protocol can take a book, label it with the title of their choice, open the book, and write on a page. When that page is submitted to Factom it cannot be altered or deleted. Nobody can back-date a page. All the data written into the book is preserved in the order it was presented to the Factom protocol.

Factom guarantees security of the records by three different methods:

The applications of the Factom protocol can be extended to a wide range of industries. Essentially, Factom can be applied to any business or industries that possess a need to organize data effectively and preserve its integrity. Basically, extending the traits of Blockchain technology that includes immutability, censorship-resistant, easy verification, and validation.

During an interview Factom’s CEO Paul Snow described three major use cases that are already being implemented thanks to partnerships with the Department of Homeland Security and the Gates Foundation:

The Factom team is divided into the executive team and core developers. Looking at their credentials, they possess strong expertise in the tech line and the business world and has offices in major cities. Factom also has deep connections with the business world, in government and banks too.

In November 2017 Founder and Factom visionary, Paul Snow, assumed the role of CEO for Factom. Snow had plans to continue Factom’s leadership in the enterprise software space as well as to serve blockchain companies during this unprecedented time of growth. Factom Co-Founder, Peter Kirby, also holds the position of  President, leading company operations, guiding revenue growth and product roadmaps.

Factom has amassed a credible line of backers that are well-known and influential. A few mentioned below

To sum up, Factom is an undervalued coin which may seem boring but holds huge potential. Given the fact that that there is no FCT supply until it reaches a  Point of decentralization where there’ll be 32 federated and 32 audited servers on an electoral format to ensure good behaviour.and that FCT will be “Burned” to produce ECs, its value will increase with usage. Factom has great appeal to organizations, thanks to its dual-tiered currency system.  Considering that most of its partnerships are in the pipelines and kept silent due to Non-Disclosure Agreements, all it takes is confirmation of adoption by major corporations for Factom to sky-rocket.

Factoids are available at the following exchanges:

Hitachi, State Bank of India Team Up To Create A Digital Payment Platf...