Ethereum’s average block time has significantly decreased after the platform reduced its mining difficulty. Within the first four days of 2020, the ETH blockchain had achieved more than 25% in time reduction for block rewards. Basically, this means that miners within this platform are expected to mine more ETH coins going forward. 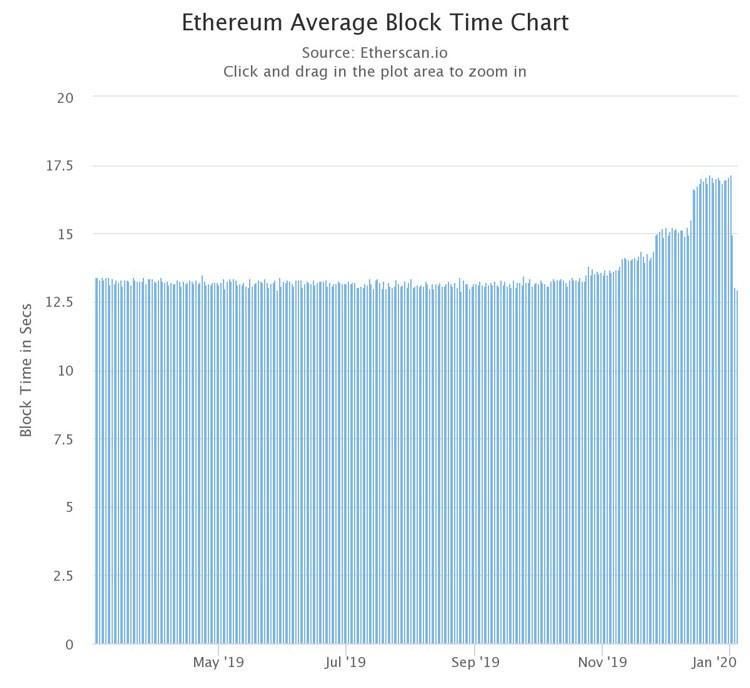 According to Etherscan, an explorer for Ethereum’s blockchain, the previously average block time of 17.16 is now at a low of 12.96 seconds.

According to CoinMetrics, "With the difficulty bomb defused, #ethereum block production has returned to previous levels, falling 2 blocks short of an ATH number of blocks in a day"

This recently completed hard fork by Ethereum is speculated to be among the major drivers of the new mining environment. Ideally, the hard fork is meant to delay the ‘ice age’ for Ethereum’s blockchain; this is the era where mining ETH will be extremely difficult and eventually become impossible.

The Muir Glacier hard fork was implemented following Ethereum’s Istanbul hard fork in which the developers had not accounted for the ‘ice age’ or difficulty bomb. As it stands, over 90% of Ethereum’s node clients’ have already synced with the new upgrade with only a handful left. In addition, several digital currency exchanges have supported the hard fork with major players like Coinbase and Binance featuring in the list.