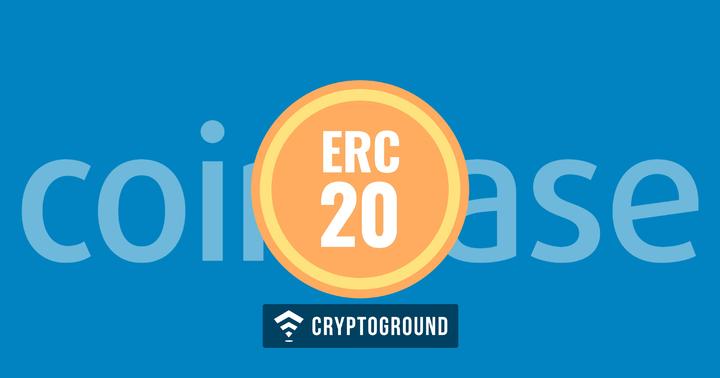 Coinbase, a major player in the crypto industry and a leading cryptocurrency exchange has now announced that they will soon be supporting ERC20 tokens on their platforms. These type of tokens will be supported on Coinbase and GDAX, as well as on Custody and on their asset management platform as well. Coinbase is yet to announce any specific ERC20 asset at the moment, but this news has resulted in an excitement in the markets.

Some popular examples of ERC20 tokens are EOS, which managed to raise $185 Million in less than a week, as well as Bancor, which raised over $150 Million. They are the backbone of most major operations taking place on the Ethereum blockchain. While Coinbase is yet to name any ERC20 tokens, this announcement has resulted in the surge in prices of a number of ERC20 tokens. ERC20 token based cryptocurrencies such as 0x and REP have surged in price following this news.

Coinbase announced this in a blog post, stating: We’re excited to announce our intention to support the Ethereum ERC20 technical standard for Coinbase in the coming months. This paves the way for supporting ERC20 assets across Coinbase products in the future, though we aren’t announcing support for any specific assets or features at this time.

GDAX, Coinbase’s cryptocurrency exchange will “wait for additional regulatory clarity” before adding any new crypto assets. As of now, no specifications have been announced as to which ERC20 tokens would be a part of GDAX. After any tokens appear on GDAX, it is only then that they would appear on the main Coinbase platform - a new policy that Coinbase intends to follow after the Bitcoin Cash scandal of last year. Coinbase has also specified that the Coinbase Commerce platform has no plan to list ERC20 tokens as of now.

Moreover, Coinbase states in their blog that: “Additionally, like GDAX, support for ERC20 will also give us a path to enabling the safe recovery customer ERC20 assets inadvertently sent to Coinbase Ethereum addresses.”

Interestingly, the impact of this move has not reflected on Ethereum prices yet, while some ERC20 tokens have shown a spike. Over the past few months, there was a heavy speculation of Coinbase adding Ripple as their next major cryptocurrency. However, it now appears that those plans have been dropped for the time being and it would be a while before we see Ripple listed on this platform.