Bitcoin Investors in India Being Summoned by Income Tax Department

With the consumer interest in Bitcoins rising, there’s also a sharp rise in the government’s interest to regulate them under local laws. While the nature of Bitcoin transactions is such that it can be completely private and anonymous, those who transact using their bank fall under the tax scanners. India, particularly, has been a nation which has been conducting a number of cryptocurrency crackdowns. Income Tax departments across the nation are scanning bank accounts for cryptocurrency related transactions.

Over the past few weeks, there have been thousands of summon notices issued by the local Income Tax departments, asking Bitcoin traders to meet with the IT authorities. The Income Tax department is summoning traders and asking them about the details of their investment, as well as their source of income from which they have made these investments.

In the letter attached below shared by a resident of Kanpur city on the condition of anonymity, the Deputy Director of Income Tax from the city has summoned the trader. The letter is a legal document from the Income Tax department to the trader, clearly stating that his personal presence is required. 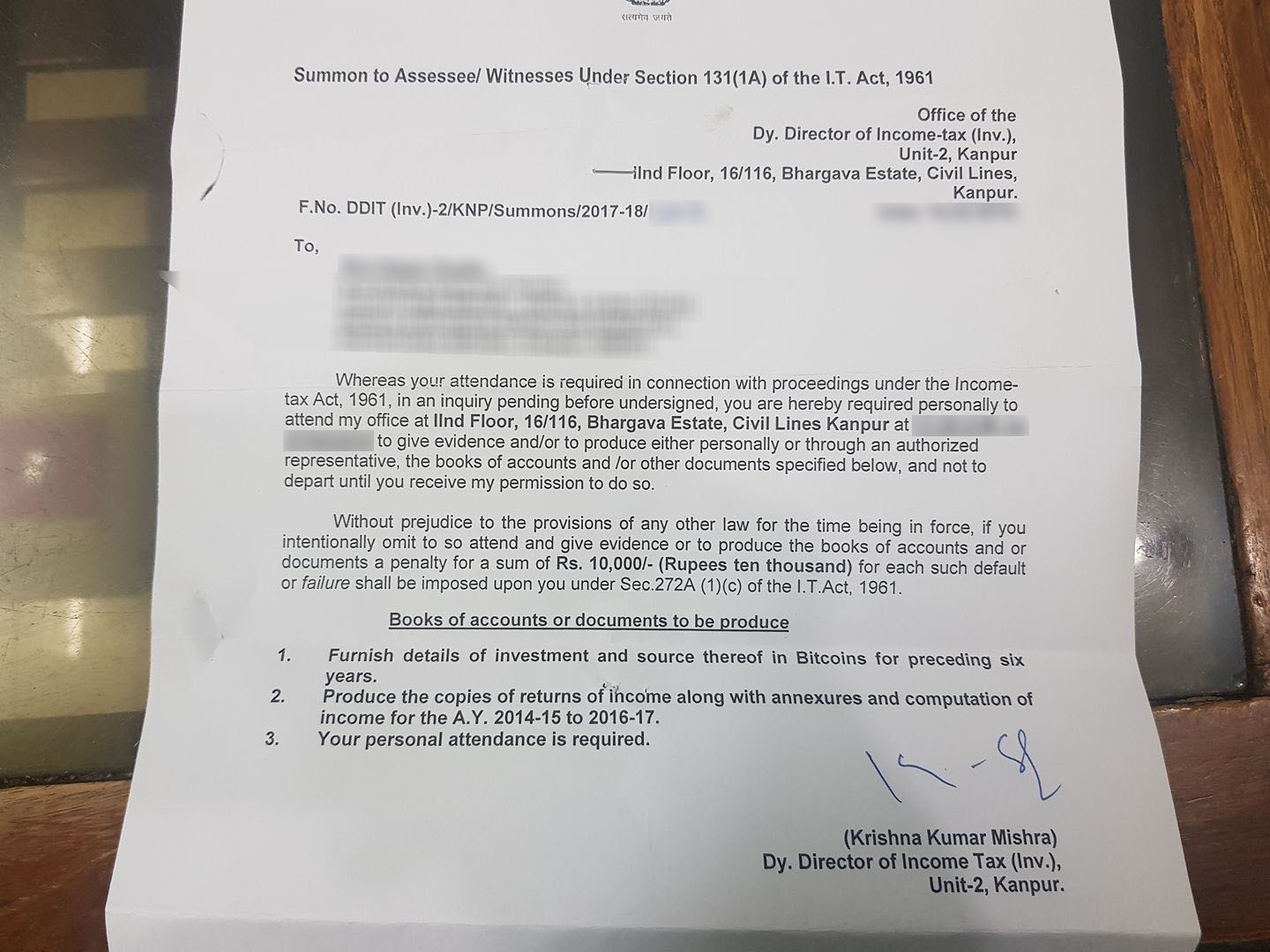 The trader is summoned by the Income Tax department of his city under the Income Tax act of 1961. He has been asked to furnish all records of his Bitcoin investments, as well as the copies of his Income Tax return of the past three years. The summon sent to the trader also states that if fails to produce any of these required documents, he will be penalized with a sum of Rs. 10,000 per default.

Why is IT Department Summoning Traders?

The Income Tax department of India has been on a drive to curb black money from the economy. It is a strong belief among these officials that there is a lot of black money stashed in the form of Bitcoin investments. With this crackdown on Bitcoin traders, the government wants to ensure that all Bitcoin transactions are recorded in the books of accounts.

On the condition of anonymity, the trader has revealed that he has invested a sum of over 10 Lakh Indian Rupees ($15,370) into cryptocurrencies. Reportedly, some users who have invested as low as Rs. 14,000 ($215) are also being summoned.

The trader further revealed that he had made these investments via Zebpay, Koinex and Localbitcoins cryptocurrency exchanges. Zebpay and Koinex are India’s domestic cryptocurrency exchanges which are linked to the banks of the traders. These exchanges have strict KYC requirements where users are asked to link their personal details - which is how the Income Tax authorities track them.

India’s stand on cryptocurrencies has been quite neutral so far - with the only major statement coming from the country’s Finance Minister, saying, ‘Cryptocurrencies such as Bitcoin are not a legal tender in India’. As of now, there have been no government guidelines on cryptocurrency taxations. However, considering this crackdown, it appears that the government will introduce stricter rules in the near future.

While India is slowly showing a strict stance on Bitcoins and cryptocurrencies, the country has been quite relaxed when it comes to the blockchain technology. In a recent tweet, the Prime Minister’s Office commented that Blockchain and Internet of Things are going to play a major role in the future of technology.