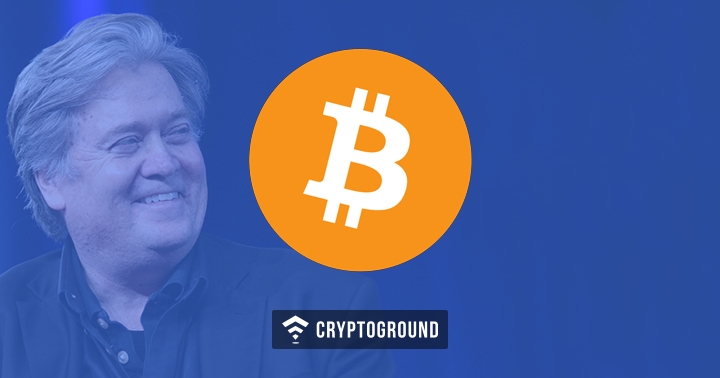 The Bitcoin-boom of 2017 was quite lucrative and got many on-board. However, 2018 has been a dull period for cryptocurrency supporters and investors as the prices have been going on a downhill ride. Despite the prices showing no sign of recovering at the moment, many have expressed support for cryptocurrencies, with the latest name being that of former Trump aide, Steve Bannon.

Bannon, who has backed cryptocurrencies by calling them a revolutionary and disruptive technology, is expected to enter the cryptocurrency investment and Initial Coin Offering (ICO) markets soon. Bannon claims that he supports cryptocurrencies because they “take back control from the central authorities”.

Following being relieved from his job as the President’s advisor, Steve Bannon now wants to help entrepreneurs and countries launch their virtual currencies. People who have met Bannon over the recent few months have been impressed by his deep knowledge about cryptocurrencies and ICOs. In the past, Bannon has claimed that had he not been involved with the Presidential campaign, he’d have gotten involved in the crypto-business back in 2016.

“It was pretty obvious to me that unless you somehow got control over your currency, all these political movements were going to be beholden to who controlled the currency. Control of the currency is control of everything.”

As per New York Times, Bannon has had meetings with several cryptocurrency investors as well as hedge funds. However, he refuses to talk more about his plans as Bannon fears that the controversy that comes with his name might affect the companies he is working with. In an earlier interview about cryptocurrencies, Bannon had stated that he owns a “good stake” in Bitcoins. He has now revealed that he would be willing to work with crypto businesses via his firm Bannon & Company.

This is an interesting statement from Steve Bannon - a man who has been the poster-child of controversies yet one of the most influential men in America, even being featured in the cover of Time Magazine, which called him “the great manipulator.”

While Stephen Bannon is known for his outrageous statements and support of Donald Trump, he has since turned against him. Bannon, who was ousted from the White House in August 2017 also stepped down from his position at Breitbart news earlier this year. While Bannon’s comments in support of cryptocurrencies are quite surprising, they aren’t a surprise to anyone who knows his background.

Interestingly, when a group of Harvard University academics met earlier this year, Bannon expressed his desire to launch his own cryptocurrency - the “Deplorables Coin” - a name perhaps inspired from Hillary Clinton’s statement calling Trump supporters “a basket of deplorables.”

Steve Bannon graduated from the Harvard Business School, which is known for its progressive and libertarian approach towards the economy. Moreover, Bannon has an experience in trading virtual currencies even before Bitcoin existed. Bannon claims to have spent $60 Million while working as the CEO of Internet Gaming Entertainment. He invested the money in “gold farming” on World of Warcraft. Moreover, Bannon’s background as an investment banker with Goldman Sachs also shows that he has an active interest in the economy.

Ethereum Foundation Grants Millions Of Dollars Towards Dapps and Smart...