7 Celebrities Who Invested in Cryptocurrency 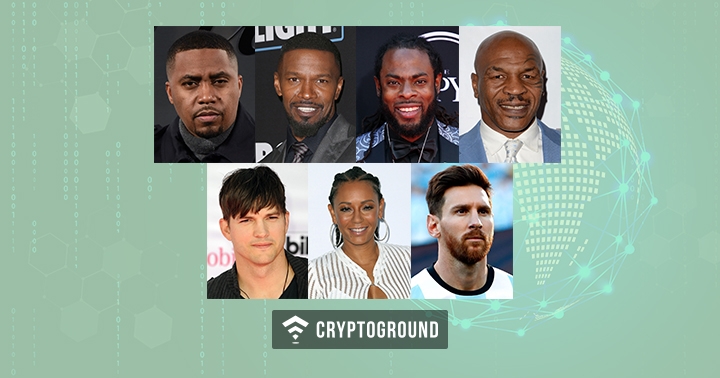 Cryptocurrency is a darling to many due to its anonymity. Due to this, it has become quite popular in the rap world. The Rapper 50-cent was one of the first crypto-millionaires. But, when he was declaring bankruptcy, he just stated that he doesn’t own any cryptocurrency at the moment. It would be difficult to trace whether he still owns it or who he sent or sold it to.

However, such incidences doesn't shadow the big cryptocurrency wave. More celebrities are still getting into the bandwagon and riding the wave of cryptocurrency investment.

Here is an interesting list of 7 celebrities who are invested in cryptocurrency and are still actively advocating it.

Later last year it emerged that the famous footballer was going to be the brand ambassador for the World’s First Blockchain Smartphone - Finney. Finney smartphone is one of the projects by the blockchain based company known as Sirin Labs. It is said that in addition to being the face of Sirin Labs, he is also an investor at the same company.

Ashton is one of the celebrities who is on the forefront in the world of cryptocurrency. In recent years, he has made a significant investment in crypto-startups such as Ripple and Bitplay. Ripple is one of the leading cryptocurrency while Bitplay enables crypto users to make payments online.

Mel B, the Spice Girl singer became one of the first musicians to start accepting Bitcoin as payment for her music in the year 2014. She also partnered with one of the largest Bitcoin mining company called Cloud Hashing. She also stated on record  that she is proud to see how Bitcoin helps her connect with her fans since anyone from around the world can buy tickets using a single currency.

Mike Tyson is one of the early players who saw the future of cryptocurrency and hopped on it. Other than investing in Bitcoin, he has gone ahead to produce Bitcoin ATMs branded with his face tattoo. In collaboration with Bitcoin Direct, he has also come up with a Bitcoin Wallet with the same branding as the ATM in hope to convert more users to start using the wallets.

Nas is an American rapper and tech investor. In early 2014, Nas and his manager invested $25 in coinbase wallet. The Bitcoin coinbase wallet is used to sell, buy and store Bitcoins. They also invested in 40 other startups at the time making them some of the first celebrities to invest in cryptocurrency.

Jamie Fox is an award-winning actor and musician. In 2017 Jamie Fox went on to his tweeter to announce that he will be endorsing Cobinhood. Cobinhood is a zero-fee cryptocurrency exchange platform.  Cobinhood uses the zero-fee trading model hoping to steal a share of the market from other platforms.

Sherman is an NFL star who has been a significant proponent of cryptocurrency. He started accepting Bitcoin on his website selling his goods. Since then, Richard Sherman has gone to become one of the most outspoken celebrities in the crypto world. Currently, he has investments in Bitcoin, Litecoin, and Ethereum.

The last couple of years has seen a lot of celebrities come forward to endorse or invest in cryptocurrency. This saw a lot of them get into fraudulent companies seeking to sway the masses using the influencer power. Some of the celebrities who endorsed sinking ships include the famous boxer, Floyd Mayweather.

Last year the SEC charged the founders of Centra Tech Inc with a fraudulent ICO. The ICO had been promoted by Floyd Mayweather and the Music Producer DJ Khaled.

This trend forced the SEC to release a fake ICO with celebrity endorsements, but when you clicked on the buy button, it would lead to a warning page. The warning was against trusting every ICO just because a celebrity has endorsed it.

The issue of privacy and identity theft is a very sensitive issue. No one wants the government or other scandalous personals into their personal business. It is therefore essential to take active steps to protect your identity. You can look for sources that may help when you need to seek identity protection services. This could be the reason why cryptocurrency are first gaining traction due to their anonymity.

In conclusion, the fact that celebrities and other rich and famous people are taking time to invest and endorse cryptocurrency might be tempting to the layperson. However, just like the SEC warning, it is important to remember that these people most possibly have no expertise in the crypto world. It might be wise for one to do their own research, enquire from the experts from the field and make your own decision.