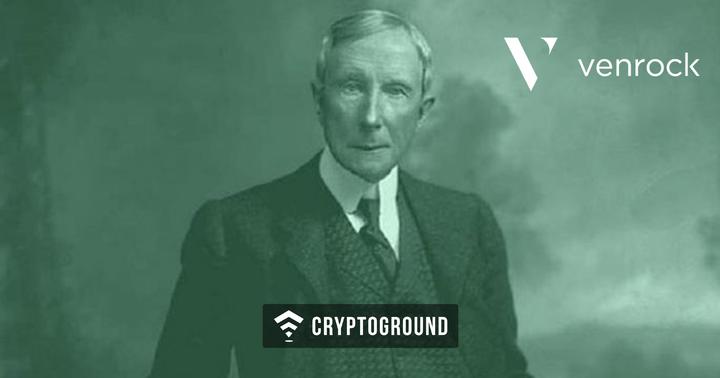 The Rockefeller Family has attained a mythical status over the years. One of the richest families on the planet, they have been associated with multiple business ventures since the 19th century. The Rockefeller family has their official Venture Capital Arm as Venrock (Basically Venture+Rockefeller = Venrock) - which has been a major investor in many leading technologies over the years. Venrock is all set to invest in cryptocurrencies now.

Venrock’s decision to invest into cryptocurrencies comes at a time when the markets are going through one of the worst slowdowns in the history. Prices are on a constant fall and uncertainty has plagued the growth of most cryptocurrencies. Fingers are being pointed at the crypto economy by traditional, mainstream names, claiming that this is a ‘bubble’. However, amid all the controversies, the Rockefellers have shown faith in this new-age economy.

The Rockefeller family is among the most popular names in New York - they own the Rockefeller Center, Museum of Modern Art, as well as the (former) World Trade Center building. Members of the family have been influential people - having served as senators as well as the Vice President of the United States at one point of time.

The company that Venrock has teamed up with is CoinFund, which is popularly known for having supported messaging app Kik help raise almost $100 Million for their Kin ICO. Reportedly, Venrock and CoinFund met over their mutual interest in investing in YouNow, the live video streaming app company.

Venrock was formed in 1969 by the grandsons of John D. Rockefeller, widely considered to be the wealthiest man in modern history and the biggest name in the Rockefeller family history. The company has invested in many major names over the past few years, including the likes of Apple and Intel in their early days. The company has the reputation of being ahead of its times and their entry into the cryptocurrency markets brings a great sense of boost in the morale for all investors.

Fortune asked Venrock about the recent slump in Bitcoin prices. To this, Venrock Partner David Pakman replied: “We’re really patient long term investors [...] we’re wondering what happens over the next five to ten years. Can we have fundamental change to a number of different markets because of a disturbed ledger, a token economy that all participants can take part in?” He continued that they are not looking at the price of a single currency over a day, a month or a year - but are in it for the long term game and for the entire cryptocurrency markets.

Venrock does have an influence in the market. The $3 Billion VC firm has been around since the late 1960s and has powered some of the biggest names in the world. “We wanted to partner with this team (CoinFund) that has been making investments and actually helping to architect a number of different crypto economies and crypto token-based projects,” Pakman added.

While 2017 was the year when the consumer awareness around cryptocurrencies reached an all-time high, it was expected that 2018 would be the year when Institutional Investment would help the cryptocurrency markets grow. So far, the signs have been positive with a number of big players entering the crypto-economy. With these big-money, mature investors entering the markets, it is expected that the prices will not only surge once again - but they will also start getting less volatile. Rockefeller owned Venrock adds a huge boost to the credibility of the crypto-economy!