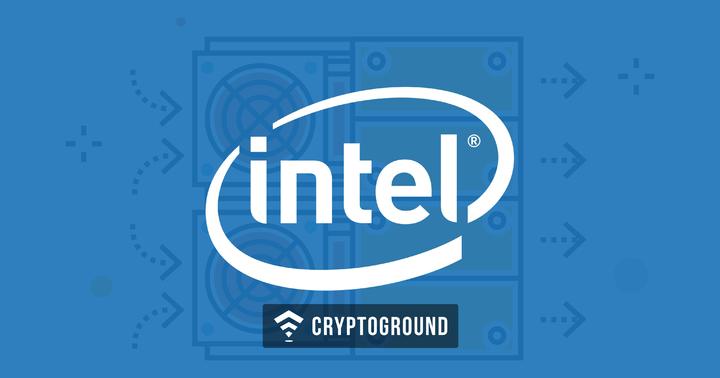 An increasing number of people are taking to cryptocurrency mining of late. While it was a trend which was on the rise for the last couple of years, the trend really peaked over the last quarter of 2017 as cryptocurrency prices began to peak. Mining as a business has now become a billion dollar industry, with names such as Bitmain, AMD and NVIDIA among the biggest players in the business. Intel, one of the biggest chip-makers of the world, has now set foot in these markets.

Intel’s new patent talks about a cryptocurrency mining ‘accelerator’. This patent was originally filed back in September 2016, but the US Patent and Trademark Organization (USPTO) has released this patent application on their website recently. The Intel patent talks about a cryptocurrency mining hardware accelerator which would reduce the amount of electricity used in mining by “reducing the space utilized and power consumed by Bitcoin mining hardware.” Intel claims that this patent would help reduce the electricity consumption by as much as 35%.

This patent would help make it easier for the miners to “search[ing] through the entire nonce space in a brute force manner while minimizing energy consumption per hash and maximizing performance per watt.” As per the patent filed by Intel, this can be done by “optimizing the critical paths in the computation intensive message digest and scheduler datapaths,” resulting in “extra time” that can “reduce switching capacitance or scale the supply voltage” to create a “35% combinational power improvement in the message digest logic.”

The patent application writes that “because of the large amount of power utilized, and the relatively high cost of that power, mining Bitcoins can be a very costly endeavor. In some embodiments, the cost to mine a single Bitcoin may exceed the value of the mined Bitcoin.” This statement is quite true in the recent days as cryptocurrency prices are on a downward trend but the cost of mining has remained the same!

This negative mining cost ratio, where cost of mining is greater than the cost of the mined currency is causing many people to be driven away from mining. However, once this technology from Intel comes into effect, it will drastically bring down the cost associated with mining as it reduces the electricity cost - one of the biggest variable costs crypto-mining.

Interestingly, this isn’t even the first time that Intel has stepped foot into the cryptocurrency or the blockchain markets. Intel has, in the past, teamed up with healthcare transaction service provider PokitDok to introduce blockchain based solutions in the healthcare industry. Intel has also worked in association with hardware wallet Ledger in October of 2017. Intel’s foray into the crypto and blockchain markets takes another step forward with this move.

New Zealand-based Cryptopia files for US Bankruptcy Protection after M...