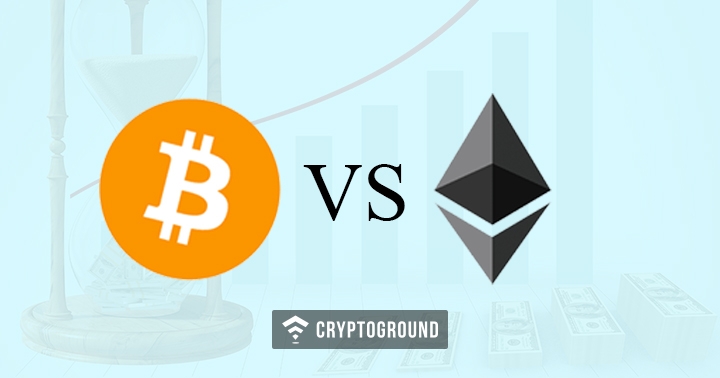 Cryptocurrencies have been around for almost a decade now. The awareness around the concept is rising and so is its mainstream acceptance. The top few currencies are the most popular as they have almost become a household-name by now, being discussed in newsrooms and parliaments across the worlds. When it comes to the world of cryptocurrencies, Bitcoin and Ethereum are two of the most dominating names.

Bitcoin is the largest cryptocurrency by market capitalization and Ethereum is the second largest. Together, the two currencies account for a significant bulk of the total cryptocurrency market cap worth hundreds of billions of dollars. Both these currencies are quite different from each other - yet some aspects remain the same. Both have a very loyal user base, which often tends to overlap.

Let us take a closer look at this rivalry between Bitcoin vs Ethereum and try and understand the similarities and differences between the two currencies - as well as a look at their past, present and future.

Bitcoin vs Ethereum: Understanding the Concept

Let us take a look at understanding both these currencies in a closer detail - how they started, where they are now and what the thought behind the currency’s creation originally was:

Bitcoin, the first cryptocurrency, started off in the year 2009. Over the past nine years, the currency has grown in terms of user base, acceptance, market capitalization as well as price and there have been several improvements in the algorithmic framework that powers the currency.

The primary purpose that Bitcoin blockchain and cryptocurrency were created was to decentralize the banking systems. While banking systems were getting slow and expensive, Bitcoin brought in a digital revolution in the form of virtual currency which could instantly be transferred, liquidated into fiat money, as well as used for the purchase of goods and services.

Bitcoin, which was created by the anonymous Satoshi Nakamoto, has held on to the numero uno spot right since it was created. The currency continues to hold the largest market capitalization in the cryptocurrency markets. Moreover, with the increasing acceptance of cryptocurrencies among businesses, Bitcoin, hailed by many as the internet’s single currency, has a long way to go.

Ethereum, on the other hand, started off in the year 2015. It is a fairly recent name in the markets and has been around for three years now. The currency has, ever since its inception, always been among the top few names in the markets. Over the past year, Ethereum has held the second position firmly (losing it to Ripple for a short while, but claiming it back again).

The biggest advantage that Ethereum has over Bitcoins, however, is the fact that it supports smart contracts. Smart Contracts are, simply put, self-executing pieces of code which continue to run on a continuous basis. These contracts cannot be edited by a third party, making them incorruptible. Smart contracts are a recent development and much is being experimented and explored. However, once smart-contract based decentralized autonomous applications become the norm, Ethereum is likely to have a golden run in the markets.

Moreover, another major benefit of Ethereum is that of late, it has become the preferred platform for those looking forward to start off their own Initial Coin Offerings (ICOs). ICOs over the Ethereum network are basically those ICOs where investors send the developers Ethereum in exchange for ERC-20 tokens.

The Ethereum platform suits the needs of many developers. Moreover, the Ethereum administrators and developers of the blockchain have also been working on new and better ways to improve the way ICOs can be held on the platform - introducing new and innovative ideas such as DAICOs.

When it comes to any cryptocurrency, the supply of the currency plays a major role in the valuation of the currency. One of the reasons that Bitcoin has a value is the fact that it is a limited resource. Like Gold under the crust of the earth, which is finite in number, Bitcoin too, is finite. Bitcoin has a total supply of 21 Million currencies in total. However, the mining algorithm is programmed in such a way that it will take more than a hundred years to mine all of them.

Ethereum, on the other hand, does not have any such limitations or restrictions. However, there have been some discussions to cap the total amount of Ethereum in circulation. However, that number keeps varying from time to time and from person to person. For the time being, Ethereum is indeed infinite in supply.

Price comparison is where it all boils down to every time two cryptocurrencies are compared. While the price of a currency is no measure of its success, let us take a look at how the price of each currency has performed over the year. We will not compare the price of Bitcoin vs the Price of Ethereum but would instead compare their market caps as that is an appropriate metric of comparison.

One of the most interesting things about understanding Bitcoin and Ethereum is the fact that both these currencies, which are quite different in terms of their purpose actually have the same mining mechanism and are facing the same problems as of now. Bitcoin, as well as Ethereum are both based on the Proof of Work Mining mechanism.

Before we proceed let us understand the Proof of Work mining mechanism in brief. Basically, in this form of mining, a miner who wishes to mine for Bitcoins or for Ethereum needs to use their processing power to solve a complex mathematical problem. In case of Bitcoins, it is done by using rigs made of multiple ASIC devices. However, in case of Ethereum, the Equihash algorithm which powers the mining activity is considered to be ASIC-Proof and mining is only possible with the help of sets of GPUs built into a GPU Mining Rig.

However, recent developments indicate that this is changing now and Ethereum’s mechanism is no longer ASIC-Proof as Bitmain as well as a few other companies have now developed ASIC Miners which can mine for Ethereum.

However, there are a number of flaws when it comes to any mining mechanism and Proof-of-Work based mining isn’t perfect as well. Over the years, it has slowed down and has become way more energy intensive than ever before. This is one of the biggest reasons why Ethereum plans to move to another form of a mining mechanism - the Proof of Stake method.

However, there’s still some time before this shift of gears happens and Ethereum as well as Bitcoins continue to face similar problems on their respective blockchain networks. Here’s a look at how both these coins deal with these problems in their own unique manner:

Let us first understand what the problem of ‘scaling’ actually is.

With time, as cryptocurrencies got popular, many users started to purchase currencies not for the purpose of using them as they were intended, but as a store of value for investment purposes. As the cryptocurrency prices rose and fell, traders began to invest in large numbers - and today cryptocurrency trading has become a major business as there are hundreds of hedge funds devoted towards investing only in cryptos.

Bitcoin’s scaling problems are not new. The currency has faced them time and again and this has resulted in several forks too. However, the most effective solutions which have happened over the past few months have been that of the introduction of the SegWit system as well as the lightning network.

The SegWit system allows users to send Bitcoins faster and cheaper - however, it is quite complex as it is supported only by a few wallets and exchanges and it needs a number of precautions to be taken where even a small mistake might result in the loss of the currencies.

The Lightning Network is a more recent development, which is still being worked upon though partially in use. This makes payments faster and cheaper with the use of multiple channels of payments.

The Plasma update, which is the first of the two, is all set to help scale Ethereum to an all-new level, to as much as 10,000 times, as per co-founder Vitalik Buterin. The main aim of this update is to ensure that an overload of smart contracts does not slow down the entire blockchain network.

The Casper update, which is due to take place in 2019 is going to bring in even bigger changes to the Ethereum blockchain network. This will be the actual change when Ethereum changes its algorithm from Proof-of-Work to Proof-of-Stake. The process is going to take time because of the Ethereum blockchain’s size, but once it gets completed, it is all set to bring in a monumental change in the way the speed and the transaction costs are handled.

This is a question that has been asked many a times by many cryptocurrency enthusiasts over the years. Ethereum has been hailed as the next-big-thing right since its inception. While it is true that Ethereum does have a number of advantages over Bitcoin, for the moment, the currency continues to play second fiddle.

However, what must also be kept in mind is the fact that Ethereum is yet to hit its complete maturity. The platform has been around for three years yet smart contracts haven’t become a mainstream technology. Moreover, Ethereum’s blockchain in itself is going through some major changes - and with the Plasma and the Casper updates coming up over the years to follow - it is expected that Ethereum is going to have a major run in the markets.

Many supporters of Ethereum hold a strong belief that Ethereum’s market capitalization will surpass that of Bitcoin’s some day. This event has been termed as ‘the flippening’ and is awaited by a number of Ethereum traders and supporters. However, for the moment, Bitcoin’s dominance continues.

Bitcoin and Ethereum are two names which have a major impact on the world of cryptocurrencies. However, while many debate over their prospects of market domination - it must be understood that all Bitcoin vs Ethereum comparisons need to be seen as two very different currencies. Apart from being stores of value which are used for transactions, Ethereum and Bitcoin are two very different entities with different purposes.

While Bitcoin is all about changing the way the payments systems work and bringing about a digital revolution in the world of finance and economics, Ethereum looks at app development and aims at becoming a platform for all decentralized and autonomous activities, while also being a store of value like Bitcoin.

To conclude, these are two very distinct currencies which share some common ground yet have diverse applications.