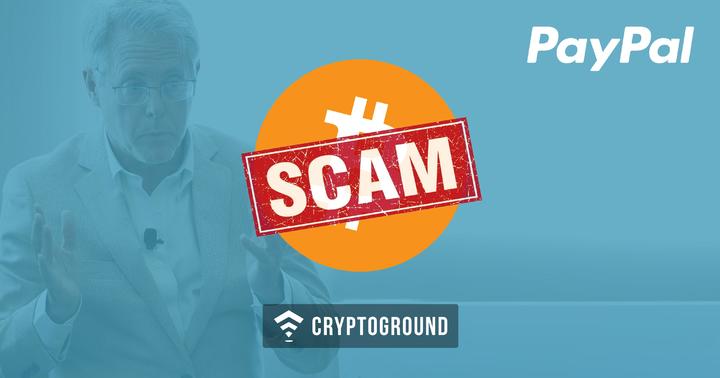 Former PayPal CEO Bill Harris, who was also the first CEO of PayPal back in its early days, has written a column on Recode blasting Bitcoin, calling a scam. Harris called Bitcoin ‘the greatest scam in history’ and a ‘colossal pump and dump scheme’. This has sparked an outrage from the crypto community. Let us take a closer look at this statement.

In an op-ed that Bill Harris wrote, he claimed that:

“In a pump-and-dump game, promoters ‘pump’ up the price of a security creating a speculative frenzy, then ‘dump’ some of their holdings at artificially high prices. And some cryptocurrencies are pure frauds. Ernst & Young estimates that 10 percent of the money raised for initial coin offerings [ICOs] has been stolen.”

This isn’t the first time a major name in the fin-tech sectors has blasted cryptocurrencies and this certainly won’t be the last time. Names such as Warren Buffett as well as Jordan Belfort, the wolf of wall street, are not so keen on cryptos either. Interestingly, while former CEO Bill Harris isn’t so keen on cryptos, Peter Thiel, the man who replaced Bill after he was ousted from the position is rather bullish on cryptos - investing millions into the markets.

Harris stated that Bitcoin is useless as a means of payment. However, many have since pointed out that Bitcoin’s adoption rates are increasing on a year-on-year basis - and that the currency is at too nascent a stage to comment on it’s acceptability. Going by the growth of Bitcoin’s acceptability, it appears that it is on a strong path.

Bill Harris further commented that Bitcoin transactions are slow and ineffective. Statements like these sound rather absurd at a time when second-layer scaling solutions are making headlines every day. The arrival of the Lightning Network is making Bitcoin transactions cheaper and faster with every passing day.

He went on to point that Bitcoin is only good for criminal activities and for usage in the darknet. Harris cites the examples of Wannacry and Silk Route - possibly the two worst examples possible as Silk Route has been shut down since long - and the Wannacry ransomware, despite the media attention it got - resulted in financial damages worth just $116,000 worth of Bitcoins! This rant from the former PayPal CEO has made many believe he is out of touch with the markets - and social media has been pointing out several glaring flaws in his statement.

Over the past few days, a number of major firms have shown faith in cryptocurrencies - including the likes of Nasdaq, which stated that they are open to the idea of becoming a crypto-exchange. With Bitcoin prices recovering and approaching the $10,000 mark - this Bill Harris rant appears rather toothless.