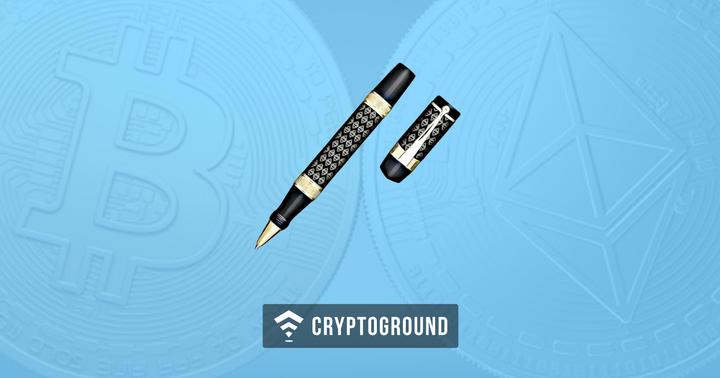 After the success of Bitcoin pens, Ancora - one of the oldest but prestigious pen manufacturers is back with an announcement of yet another crypto pen - the Ethereum pens. As per the reports, the Ethereum pens will go on sale in its pre-staging face from April. It will be available at 50 percent discount as opposed to the Bitcoin pens which were initially offered for a 60 percent discount. The company plans to provide a limited amount of pens this time as well and will be sold on ICO-like sale.

Ethereum Pens will be available in two variants - Rollerball pens and Fountain pens. As per the report, the units of Ethereum Rollerball pens will be limited to 888 while that of Ethereum Fountain pens will only be 88. The sale will be arranged for one month which will go live on April 8 and end on May 8. During this period, the new rollerball pen will be sold at $1,000 while the famous fountain pens will be sold at $1,250 each. The second stage of the sale will begin after that from May 12 to May 27 where the prices will increase by $250 for each. The pens will then be distributed in retail stores from July 1 where the prices will shoot up to $2,250 for rollerball pen and $2,500 for the fountain pen.

During the announcement, the company also revealed another limited offer. It proposes to trade a few Ethereum pens imbibing other metals for cryptocurrencies. Each of these pens is said to have a platinum unique number which will be available for 15 ETH. It also has two more variants - the gold and silver which are currently rated for 10 ETH and 5 ETH respectively.

Ancora is an Italy based firm which was founded in 1919. It has been manufacturing luxury pens over the years. It is popularly known for its Titan edition of the pen which is known to have an integrated piece of the famous ship. With the hype in crypto and blockchain technology, it came up with a unique idea of currency pens and formulated a new series featuring popular cryptocurrencies. The first in this series was Bitcoin Pen. The Bitcoin Pen sale went live in December last year which was a big hit. During that time the firm also ran a poll for the next crypto pen that the customers would want to buy. Ethereum seems to have won the vote.