How to trade using Zebpay?

India is among the biggest forces in the world when it comes to sheer numbers. Any technology that starts off truly gets a boost in momentum once it reaches the Indian markets.

Update: As of September 28, 2018, Zebpay Cryptocurrency Exchange has shut down. However, Zebpay wallets are still functional. You can read more about it here.

Zebpay started off in 2012 and has since been one of the biggest names when it comes to Bitcoin trade in India. What sets Zebpay apart from many other exchanges is the fact that it is extremely simple to use. Their mobile app can allow you to buy Bitcoins in just a few taps! The company has offices in Mumbai, Ahmedabad and Singapore.

Why Should You Use Zebpay?

The answer to the question comes in one simple word: Simplicity.

The Zebpay app is perhaps the most easy to use application for buying Bitcoins. An average person who wants to purchase Bitcoins as an investment does not need the technical know-hows of setting up a miner or getting into complex multi-coin exchanges such as Bittrex and Poloniex, etc.

They need a simple platform where they can purchase Bitcoins while the price is low and sell them off when it peaks. Zebpay is the ideal platform for that. Let us now take a look at how to buy and sell Bitcoins using Zebpay.

Signing up for Zebpay:

In order to create an account Zebpay, you would need to provide certain personal details about yourself. These include:

These are four compulsory elements which have to be provided to Zebpay. Optionally, you can also provide your Aadhaar details. The PAN Card is a Government of India requirement and the bank details are needed as this is the account where Zebpay will send you the money once you choose to withdraw. Email address and Phone number are needed to verify your identity and send you various notifications upon purchase and sales of Bitcoins so that you would be immediately alerted if an unauthorized transaction takes place.

How to buy Bitcoins using Zebpay?

Let us now look at how to buy Bitcoins using Zebpay:

Step 1: Install the Zebpay app and sign up. (iOS link) (Android Link) Fill in all the necessary personal information as mentioned above and get your account verified. You will also be asked to set up a security PIN to verify transactions. Make sure you don’t forget this PIN. Zebpay usually takes 4 hours to verify your account if you do it early in the day. For those who register later in the day, it is an overnight process for them. This is how the Zebpay home screen looks like after you are done with all the formalities: 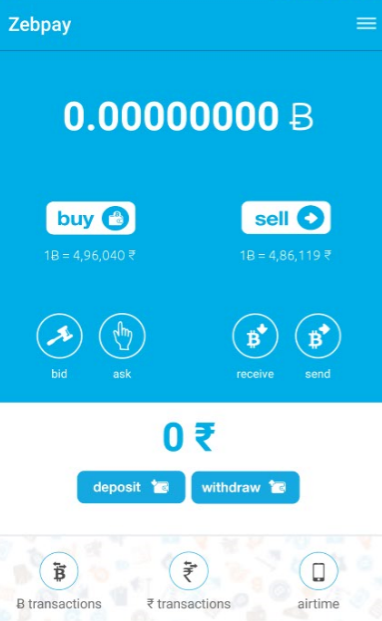 Step 2: Before you can buy Bitcoins using the Zebpay exchange, you would need to deposit money to your Zebpay account. For that, tap on deposit. This is the screen that would pop up next. The screen on the left is where you have to choose the mode of payment. You can either make a bank transfer or make use of internet banking. There are no extra charges in bank transfer while internet banking does charge some fees. 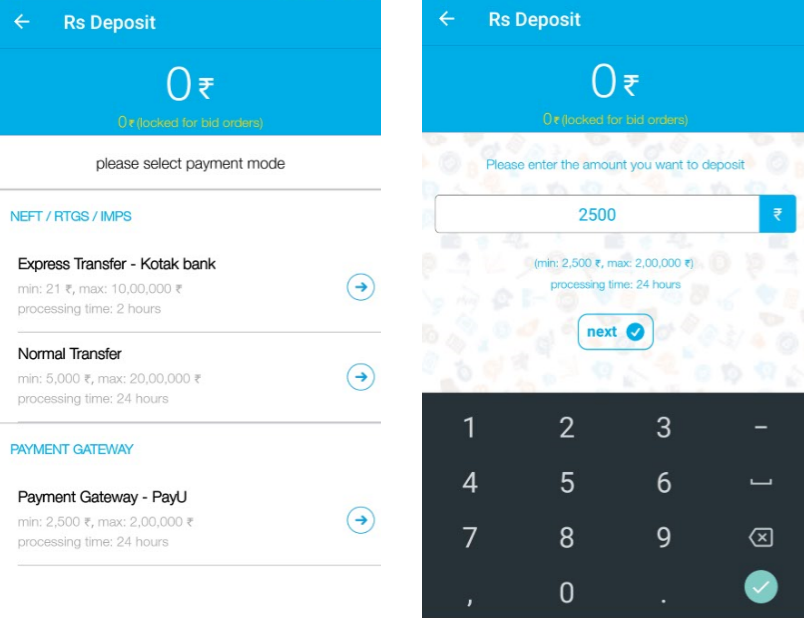 In this example we are using internet banking which is quicker than NEFT transfer. It takes 24 hours for a regular transfer. However, users of Kotak bank can make use of Express transfer service for immediate transfer. Internet banking is instant but charges you a fees of Rs. 48.36 for every Rs. 2500 that you deposit. If you’re depositing Rs. 2500 in your Zebpay account using Internet Banking, you’d be charged Rs. 2548.36 in your bank. 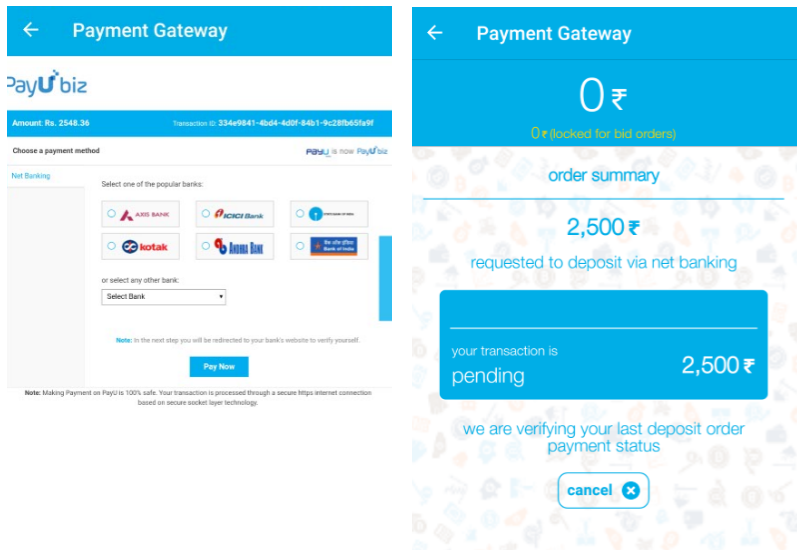 After your transaction is successful you will get an e-mail, an SMS, as well as an in-app notification letting you know about this. You will then be able to see your balance on the home screen of the app.

Step 3: Now that your Zebpay account has money, you can buy Bitcoins using that balance. In order to buy Bitcoins, go to your Zebpay home screen and tap on the ‘Buy’ button. 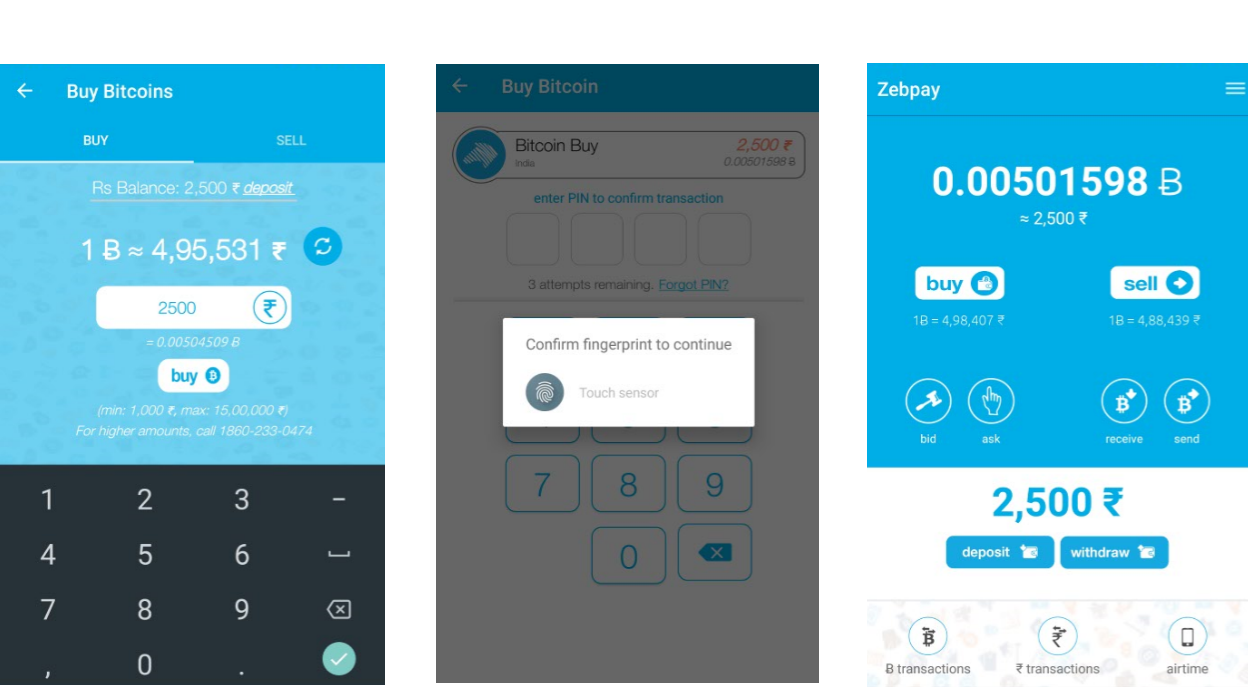 The first screen on the left is the buy screen where you can enter the amount of money you want to buy Bitcoins for. If you have Rs. 10,000 in your Zebpay account but you want to buy Bitcoins for only Rs. 1000, that is possible too. After that your main balance will be updated to Rs. 9000 while you’ll own Bitcoins worth Rs. 1000. In this example we are purchasing Bitcoins worth Rs. 2500.

After you put in the amount of money you want to buy for, tap on the buy button. You will then be asked to confirm the transaction by entering your security PIN or by verifying using your fingerprint. Once you verify, your Bitcoin balance will be updated on the home screen.

How to Sell Bitcoins on Zebpay?

Step 1: Tap on ‘Sell’ and enter the amount you want to withdraw: this could be in Bitcoins or in Rupees. If you enter the Bitcoin value it will automatically be converted into Rupees and withdrawn back to your Zebpay account. You can sell any portion of the Bitcoins you hold. If you hold 1 Bitcoin in your Zebpay account, you can choose to withdraw either 10,000 Rupees from it or 0.021 BTC. In our example below we are selling the entire amount: 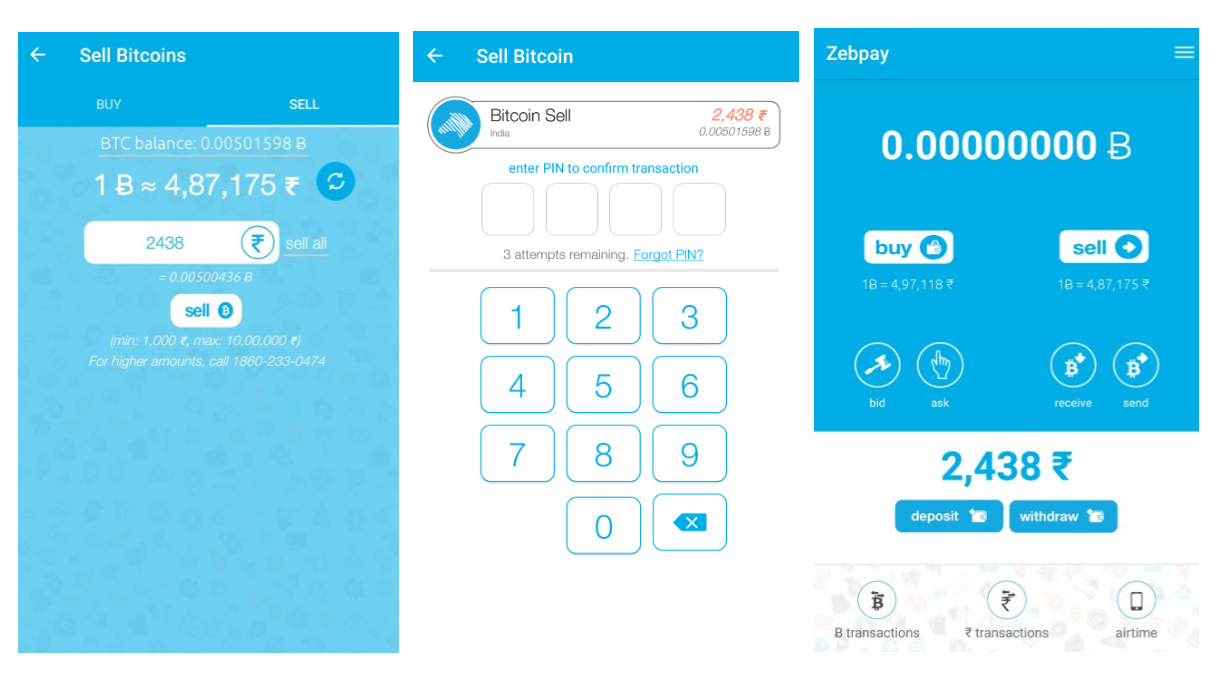 You would then be asked to enter your security PIN or use your fingerprint to authenticate the transaction. Please note that now the money will flow from your Bitcoins to your Zebpay account and not to your bank account. The balance will now be reflected on your Zebpay home screen. Let us now take a look at how to withdraw the balance from Zebpay account to your bank account.

Step 2: Tap on the ‘Withdraw’ button on the home screen of the Zebpay app. 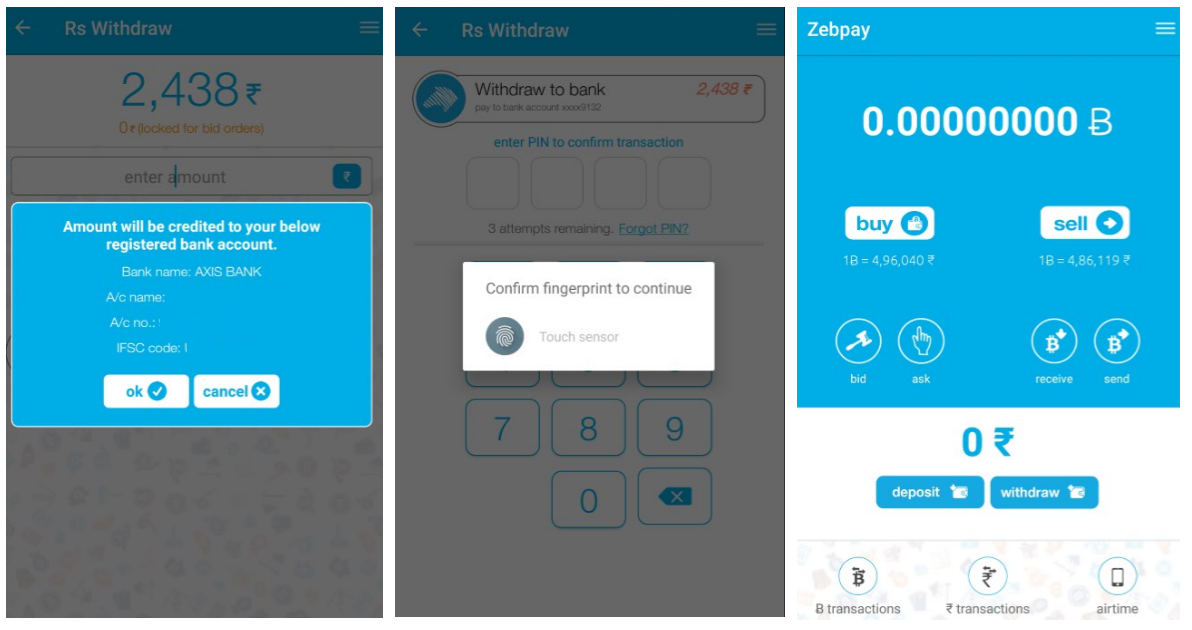 Next, enter the amount you wish to withdraw and continue.The app will show you a notification with your bank details. If those details are correct, tap on OK to continue. There, you would be asked for your PIN to confirm that this is indeed you who wants to withdraw. After you verify this detail, the amount will be deducted from your Zebpay balance and it will be transferred back to your bank account. This process takes a couple of hours to process, and charges you a fixed amount of Rs.10 per bank transfer.

Also Read: How to Mine Bitcoins

This is how you sell bitcoins and withdraw money to your bank account using Zebpay.