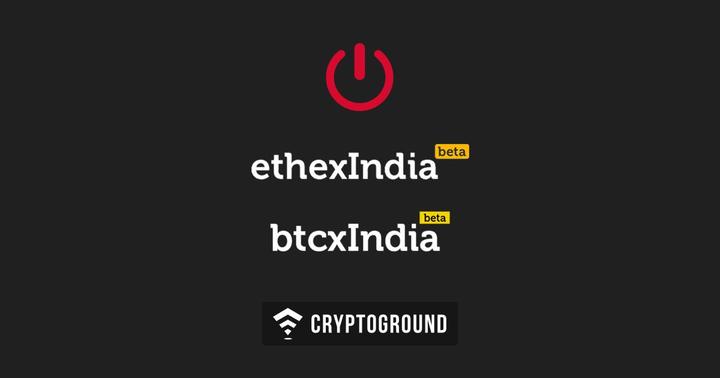 EthexIndia and BTCXIndia - two of the major cryptocurrency exchanges in India have now shut down. The companies have announced that they will be suspending all trading activities on their platforms effective immediately. In an email that the exchanges sent out to the users, it was stated “All trading activity will be halted as of March 5th 2018. Please withdraw all assets from your account before then.”

Those users who fail to withdraw their assets from these exchanges will end up facing an annual wallet maintenance fees. These cryptocurrency exchanges are forced to halt trading operations because of the regulations that the Indian government is imposing upon exchanges in India. The parent company blames the Indian government to be hostile towards exchanges.

In addition to the hostile attitude of the Indian government, it is also likely that another reason for the shutting down of BTCXIndia and EthexIndia could be that the Indian tax authorities are now going strict on cryptocurrency investors in the nation. In December last year Indian media outlets reported that the Indian tax authorities had been interrogating all cryptocurrency exchanges operating for over a year in the nation, trying to understand their operations.

However, those meetings were the first step towards what would eventually turn to be a total crackdown on high net-worth cryptocurrency investors. The tax authorities forced exchanges to provide them with data regarding investors who had invested a large amount into cryptocurrencies. The tax department wanted to check if these individuals were reporting their profits and paying the capital gains tax. The tax department has since started to send out summons to individuals - a copy of one such summon could be seen here.

It isn’t just India which is going strict on cryptocurrency exchanges and high net-worth investors. Even the US SEC and the IRS are going strict. Recently, Coinbase was made to provide details of 13,000 investors who had invested a large amount into cryptocurrencies so that they could be interrogated over their investments and tax payments.

India’s growing influence on the cryptocurrency world is quite visible. On the day of India’s Union Budget 2018, the Finance Minister made a statement saying ‘Cryptocurrencies are not a legal tender in India’. The impact of this one statement was massive, causing Indian cryptocurrency exchanges witnessing an unusually high amount of withdrawals - momentarily taking the Bitcoin price down to $4,000 in India for a few minutes.

The Indian government and laws had been quite relaxed and nonchalant when it came to cryptocurrencies till recently. However, over the past few months, India’s tax authorities and economic bodies have been gearing up and tightening the regulations. March-April is usually the ‘tax season’ in India - as March is the end of the Indian financial year and April marks the beginning of a new financial year - which is perhaps another reason the tax authorities want to ensure all Bitcoin profits are recorded duly.

BTCXIndia and EthexIndia have not shut down forever, but have indefinitely suspended their operations - with no suggestions as to when they intend to resume trading. They may perhaps be the first to fall and other cryptocurrency exchanges based in India may too have to take this route if the government continues to remain hostile.

Ripple (XRP/USD) Price Prediction via Technical Analysis : No Signs of...

Andreessen Horowitz To Start Off a New Cryptocurrency Investment Fund