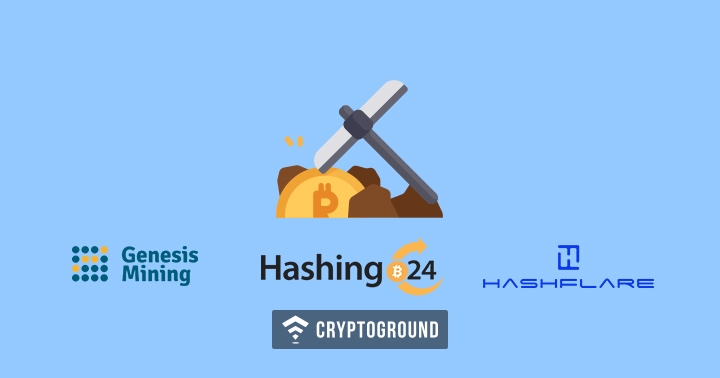 Bitcoins are getting increasingly popular with every passing day. With the rise in the popularity of bitcoins, there has also been quite an active interest in bitcoin mining. An increasingly large number of people are investing their money into bitcoin mining, eyeing lucrative returns in the form of bitcoin rewards. With mining becoming popular, cloud mining too, is getting a lot of attention.

To understand what bitcoin cloud mining is, it is essential to understand what bitcoin mining is and how it functions. Putting it in simple words, bitcoin mining is the process by which new bitcoins are generated. Mining requires miners using their computing power to solve complex mathematical algorithms. This is an energy intensive process which requires multiple devices mining simultaneously. Moreover, the process also generates a large amount of heat.

Bitcoin mining requires the purchase of specialized devices such as a Graphic Processing Unit (GPU) or an ASIC (Application Specific Integrated Circuit) Miner. These devices are often quite expensive and tend to cost a lot of money. Moreover, there’s also the constant consumption of energy which the mining devices consume as well as the energy spent in keeping these devices cool.

The high costs of running and maintaining a mining operation is what makes cloud mining a more appealing option for many miners. Let us now take a closer look at what bitcoin cloud mining is:

Simply put, bitcoin cloud mining is the process by which you can outsource your mining operations. You do not have to invest in buying mining equipment or about keeping the device cool and various other maintenance charges. It is particularly beneficial for those living in regions where the cost of electricity is quite high as cloud mining operations are usually based in countries where the cost of electricity is low.

The bitcoin cloud mining companies charge you a contract price (which may, or in most cases, may not include the cost of electricity). However, cloud mining helps you save a lot of money when it comes to the cost of mining equipment.

Before you choose the best bitcoin cloud mining website that suits your needs, you need to consider the following factors which have a major impact on your ROI in cloud mining:

Cloud mining tends to have a number of benefits when compared with traditional mining methods. Let us take a closer look at the benefits of bitcoin cloud mining.

Broadly speaking, there are three types of cloud mining operations:

One of the most popular and best cloud mining websites, Genesis Mining offers three mining plans and also the option to create a custom plan. It charges $285 for 1TH/s for a five year contract. However, for those who want a different power or a different time limit, they have the option to create a custom plan and would be priced accordingly. Genesis Mining charges additional maintenance fees.

A trusted name when it comes to cloud mining, Hashing24 has been around for quite some time and has reasonably priced bitcoin cloud mining plans. It provides instant deliveries and charges $12.50 for a hashing power of 1000 GH/s. However, the website does charge some additional maintenance charges which they specify at the time of the purchase of the plan.

Hashflare allows for the cloud mining of Bitcoin, Ethereum, Litecoin, ZCash and Dash cryptocurrencies. This is considered to be among the best cloud mining websites because of its instant payouts and for the fact that it comes with no additional or hidden fees.

This website provides multiple options when it comes to the cryptocurrencies you can mine for using their platform. This is of particularly good use for those who are looking forward to make a long-term investment into cloud mining for bitcoins. Their rental charges range from 24 hours to 10 years. The website provides updates on the mining activity every 60 seconds. However, it charges an additional fee for electricity and maintenance.

Plan-C offers a refreshing mix of multiple cryptocurrency related services which include cloud mining, cryptocurrency trading, as well as investment into altcoins. It offers three packages that users can purchase where the investment is divided as follows: 60% for mining, 20% for trading, 20% for altcoins. This option for multiple investments makes Plan-C a rather unique option. Their plans range from $250 to $5000.

Micro-BTC is one of the most beginner friendly cloud mining websites. It offers multiple plans which the users can choose from - even a free plan which provides a limited, 30 GH/s hashing power - which allows the users to get a feel of their services with no investment whatsoever. It offers instant payouts and does not charge an additional maintenance fees.

Owned by Bitmain, one of the biggest, multi-billion dollar cryptocurrency mining equipment manufacturers, HashNest has been around since 2014 and has been one of the biggest names in the world of cloud mining. HashNest allows you to choose your mining equipment, all of which are AntMiner devices, created by Bitmain. The website offers a variety of mining packages - but one needs to register to access the pricing plans.

How to Stay Safe From Cloud Mining Scams

One thing that anyone getting involved in cloud mining operations must know is that the world of cloud mining is full of scams. This problem is not specific to cloud mining but to the world of cryptocurrencies at large - the number of ICO exit scams is on the rise and millions of dollars have been lost. There are also many ‘bitcoin investment schemes’ such as Bitconnect, etc. which have been tricking people into investing cryptocurrencies and disappearing with their money.

There are a number of cloud mining scams running in the world of bitcoin mining where mining service providers run away after collecting the money from those looking forward to mine with them. Many of these cloud mining scam companies don’t even own a single equipment!

Here’s a quick look at how to stay safe from cloud mining scams:

These factors are quite important and one needs to give them a serious thought before they proceed with cloud mining operations.

Yes, it is possible to mine for Bitcoins in the Amazon Cloud - but it is strongly advised to not do so. First off, it is against the terms of service of Amazon and the company may shut down your account. Secondly, it will be highly unprofitable to do so. For those looking forward to mine for Bitcoins using cloud mining - it is best advised to check out our list of the best cloud mining websites of 2019 and join any of these services.

No service in the world is free and Bitcoin cloud mining companies are not providing you with an avenue to mine for currencies for free of cost. Cloud mining companies make a profit on the mining fee and the transaction fees - moreover, most of their costs are covered by the user when he pays for the contract.

Starting amount depends on how long you want to mine for and which cloud mining website you are deciding to go with. Some websites allow you buy contracts worth as little as a few dollars while there are few where the amount goes up to thousands of dollars. Some websites also allow you to buy custom contracts. To sum it up in one statement - the starting amount depends on the amount of hashing power that you want to purchase. The more the hash rate, the higher you would have to pay.

There is no way to determine the profitability of cloud mining contracts. Partly because it all depends upon the price of the cryptocurrency being mined - and knowing that the markets are highly volatile and a currency worth $19500 may be worth $6500 in six months’ time, profitability can just not be determined in advance.

Moreover, it is worth pointing out that most cloud mining services will cancel the ‘lifetime’ subscription once it starts becoming a loss-making unit and the average lifespan of a lifetime contract is less than 2 years.

SHA-256 and Scrypt are both cryptocurrency mining algorithms which are used to authenticate blocks on the blockchain. The algorithm is set by the developer of the currency. Here’s a closer look at the difference between the two types of algorithms:

SHA-256: Popularly used by Bitcoin and other cryptocurrencies developed upon the Bitcoin code, SHA-256 is a complex yet very secure algorithm which requires a very high hashing power to mine for currencies. This kind of an algorithm makes it hard for individual miners and requires multiple ASIC devices to mine. The SHA-256 algorithm is also slower than compared to Scrypt-based mining.

Scrypt: Less energy-intensive than compared to SHA-256, Scrypt is an algorithm which a number of new cryptocurrencies are using. While SHA-256 based currencies need a hashing power which has to be measured in Gigahashes per second (GH/s), Scrypt based currencies do not require that amount of a hashing power and can be measured in Kilohashes or even Megahashes per second (KH/s or MH/s). Currencies running the Scrypt algorithm are slightly easier to mine.

No, most cloud mining websites do not allow users to change the pool they mine on. However, some websites offer the users the answer that this is something which may change in the future - however, for now it is not practical in most cases. For a detailed understanding of what cryptocurrency mining pools are and how they function, you might want to refer our guide to the best Bitcoin mining pools of 2019.

To conclude, let us ponder over the thought - is bitcoin cloud mining worth your investments? Over the past there have been various allegations that cloud mining is entirely a scam - and that it is hard to even break even while working with cloud mining businesses. However, this trend has been changing of late, especially with bitcoin prices skyrocketing and hitting new highs. Cloud Mining is getting more profitable than ever before - but to attain its true potential, it would require bitcoin prices remaining stable - or even growing higher.

Cloud mining is not something that an absolute beginner should try out - as it is likely that they’d get their fingers burnt. However, those with an elementary understanding of the bitcoin markets and those who have been trading for a while could give it a shot. The biggest benefit of cloud mining is that you do not need to purchase, maintain or worry about the mining equipments at all.

While it is often speculated and debated in crypto-communities, the returns on cloud mining are highly dependent upon the price of the currency you are mining. We hope this article helps you make a better, well-informed choice on choosing the best cloud mining website which suits all your needs.