Steve Wozniak Believes Ethereum Has The Potential to be The Next Apple! 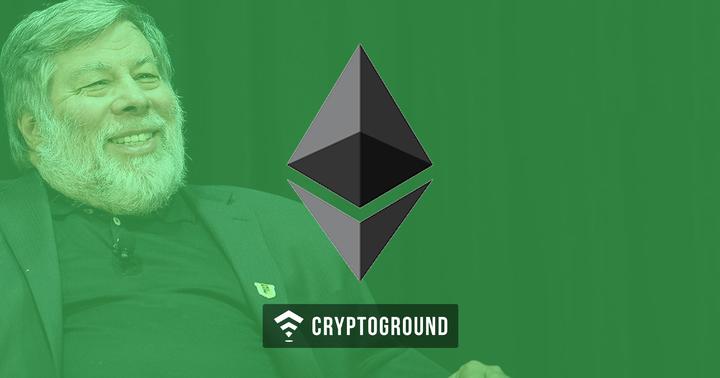 Apple co-founder Steve Wozniak has been a lifelong geek and has tried his hands at various technologies - including cryptocurrencies. In a recent conference in Vienna, Wozniak commented that Ethereum has the potential to become the next Apple! He pointed out some similarities between the two companies and appeared to be quite optimistic about the long-term success of Ethereum.

This is quite a statement, especially when coming from Steve Wozniak - who is one of the most respected names in the Silicon Valley circles. The Woz, as he is affectionately known, has been optimistic about cryptocurrencies in the past - and he continues to endorse various cryptocurrencies, the latest being Ethereum.

Why Wozniak Compared Ethereum with Apple

Wozniak explained his comparison by saying “Ethereum interests me because it can do things and because it’s a platform.” Wozniak commented that Apple too, was a ‘platform’ when they started off - they shaped the way and set a standard as of how a computer should look like - and it is using their open-source technology and initial framework that the markets progressed. Wozniak believes that Ethereum has a similar role to play for the blockchain and cryptocurrency tech.

“Here’s all the documentation, open source, you can see how you develop parts, look at the examples we have done. How to develop software, how to modify the softwares in here.It was a platform for others, so thousands of companies started up….So platforms is how the world can grow by opening up to millions of other smart people.”

The Woz further commented that what really goes in Apple’s favour is the App Store - which in his opinion is a bigger innovation than the iPhone itself! Third-party apps are developed for the iPhones and distributed using the App Store platform - Ethereum could act as a similar platform, helping decentralized apps find a platform where they can be noticed for mass adoption!

For those who may not know, being ‘the next Apple’ is a big deal for any company as Apple is considered to be a company at the pinnacle of success. Having started off in a garage - it has now become a global powerhouse when it comes to technology and a company that dominates the stock markets! Apple is also known for its innovation and cutting-edge technology - both of which are perhaps reflected in Ethereum’s tech.

Wozniak has been a believer in cryptocurrencies. While many in the Silicon Valley have shied away from commenting on the crypto and blockchain sector, Wozniak has been a vocal personality and has often commented on his experiments with cryptocurrencies. The Woz claims that he owns 1 BTC and 2 ETH at the moment - only for experimental purposes and not as an investment upon which he intends to profit.

Talking of cryptocurrency profits, Steve Wozniak has admitted in the past that he made huge profits out of the cryptocurrency boom of 2017! Wozniak reportedly bought Bitcoins when they were priced at $700 and sold them off at ‘just the right price’. With Wozniak backing Ethereum as the next big thing, it would be interesting to see the impact of his statement on the currency’s price.