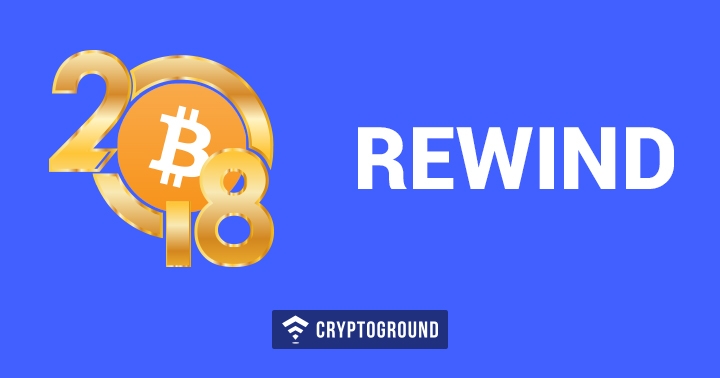 2018 was a year that most cryptocurrency traders and investors would like to forget. Keeping the first couple of weeks aside - most of the year has been pretty disappointing, as markets have been going through a strong bearish motion, as cryptocurrency prices continue to fall. However, amid these dark clouds, there were a few silver linings as well. Let us take a closer look at how the year was for the cryptocurrency markets - and analyze the ups and downs of 2018.

All That Went Wrong for Cryptocurrencies in 2018

Bitcoin’s Downtrend: The biggest news story of the year in the crypto-community was the strong downtrend that Bitcoin (BTC) has been caught in. The apex currency in the markets fell from the all-time high of $19,325 to a low of $3,200 in the course of a year. This strong downtrend resulted in Bitcoin’s market cap declining from $325 Billion to $57 Billion.

Decline in Mining: Considering the fact that the price of cryptocurrencies went through a major jolt this year, a large number of miners backed out of the markets as mining operations were getting expensive and the cost of mining was higher than the profit that they were generating. Over the course of the year, Nvidia exited the cryptocurrency mining markets, GMO shut down its mining operations - and even industry giant Bitmain is expected to cut down its workforce by 50% as disgruntled miners are selling off their mining equipment by the kilogram.

Then there were hacks at BitGrail, Zaif, Electrum, Bithumb and a number of other exchanges as well. Even the largest cryptocurrency exchange in the world, Binance, was attacked (but the hackers failed in this case). These hacks have not only resulted in massive financial losses - but also a loss of faith in the crypto-industry at large.

The Bitcoin Cash Fork: Now the Bitcoin Cash Fork may be a what-went-wrong or a silver-lining entry depending on which side of the spectrum you view it from. However, regardless of the biases for or against the fork, the one thing that it has clearly proven to be is that it was a disaster for the cryptocurrency markets. The time after the fork was among the darkest phases of the year as markets bled out even more - and the markets had a deep fall, with many fearing that Bitcoin might even enter the 2000s as a repercussion of this.

Crypto Scams: While cryptocurrency markets went through a tough time, cryptocurrency scams were there to make these bad times even worse. The year witnessed a large number of ponzi schemes and cryptocurrency scams. Reports from all over the world about people pretending to be tax officials and demanding cryptocurrencies to pay overdue taxes started coming in. Moreover, Twitter-based scams also rose this year: celebrity impersonations were on the rise, and some users even hacked verified accounts and changed their name to appear as if Elon Musk was asking them to deposit cryptocurrencies into a certain account. Thankfully, Twitter took timely action on this.

Fraud ICOs: ICO scams took off in 2017 and peaked in early 2018. This problem reached such an extent that the US Securities and Exchange Commission (SEC) had to create a fake ICO website to let investors know about how a fake ICO website looks like! However, with the decline in crypto-prices and user interest as well as the rise in awareness levels, the number of fake ICOs has substantially gone down over the course of the year.

The Long Wait for Institutional Investors: While retail investors drove the price to the moon in 2017, it was expected that large-scale investors, institutional buyers, would be the ones who would help the markets achieve their true potential in 2018, helping the price go much beyond the existing all-time high. However, before institutional players could invest, the markets went through a strong downtrend - and continue to be dominated by the bears with no signs of these big-money players.

SEC vs ETF: Exchange Traded Funds were another controversial topic of 2018. The SEC had made it clear that the markets are not ready for ETFs as of now. Even as big players such as the Winklevoss twins tried to introduce their ETFs, the SEC continued to delay its verdict time after time - and the fate of ETFs would finally be decided in 2019. Investors remain positive that ETFs would help drive funds into the cryptocurrency markets.

International Affairs: A number of countries went strict on cryptocurrencies over the year. India being one of the biggest such names - the country witnessed major regulatory uncertainty, as the apex banking body in India, the Reserve Bank of India announced that no govt. regulated bodies would be allowed to engage with those dealing in cryptocurrencies. This led to a major court battle and periods of regulatory confusion in the country which accounted for a large number of crypto transactions. The confusion continues as the court case heads into 2019.

The Advertising Bans: Another major controversy of the year came early on in 2018 when social media firms and internet giants such as Facebook, Google, Twitter, etc. announced a ban on cryptocurrency advertising. This ban was aimed at reducing the spread of fraud ICOs and scam companies. However, following a major outrage from the crypto community, the bans were partially or wholly reversed by most of these firms.

While 2018 had little to be cheerful about, here are a few things that appear to be the ‘silver lining’ in a year otherwise plagued by dark clouds. Here’s a look at some good news from 2018:

Lightning Network: The lightning network continues to impress! The network has grown by over 200% just in the month of December 2018 - currently standing in at a capacity of 3.25 Million SAT - despite a slow, bearish market where Bitcoins’ price is struggling to stay stable past the $4,000 mark. As markets recover in 2019, it is expected that the lightning network will help drive the Bitcoin adoptions forward.

The Rise of Stablecoins: 2018 was a year marred by a strong bear trend. In times like these when people weren’t so sure about how their cryptocurrency holdings are going to perform, they looked up to stablecoins to ensure that their holdings in USD are not affected despite the ups and downs of the markets. Tether rose to become the 5th largest cryptocurrency by market cap for a brief period of time.

In addition to Tether, a number of stablecoins such as True USD (TUSD) performed really well. Circle and Coinbase joined hands to create the USD Coin (USDC) cryptocurrency, while Gemini released the Gemini Dollar (GUSD) stablecoin. The Paxos Standard Token (PAX) was another stablecoin which impressed the markets this year.

Expansion of Cryptocurrency Exchanges: In a year where cryptocurrency prices weren’t so attractive, cryptocurrency exchanges focused on expansion strategies. While some exchanges moved their base due to regulatory restrictions - some decided to tap into newer markets! Giants such as Huobi made the move to tap into the US markets, as well as try out peer-to-peer solutions in economies where crypto trading stood in a legal gray zone.

Coinbase was perhaps the best example of this expansion - as the exchange saw an influx of talent - with a new CFO as well as CTO, and a few acquisitions along the way. In addition to that, Coinbase added a number of new coins - and is now reviewing the possibility of including 30 more cryptocurrencies (including Ripple!) into their offerings.

Crypto Charity: Cryptocurrency philanthropy boomed this year. With the Pineapple Fund donating cryptocurrencies worth over $50 Million for charitable causes leading the way, a number of other names too came forward. Coinbase CEO Brian Armstrong started off his own crypto-charity venture - and also announced his participation in the Giving Pledge, promising to donate a majority of his wealth to charity. Cryptocurrencies came to humanitarian aid this year, a trend which is expected to carry on over the years to come.

Regulatory Clarity: While there were regulatory confusions in certain parts of the world, overall it appears that 2018 has been a good time for regulatory clarity and taxation. A number of countries have begun to take a keen interest in cryptocurrencies - names such as France, Japan and Germany have introduced clarity in legislations regarding certain aspects of cryptocurrencies. More countries are expected to follow suit in 2019.

Blockchain Integrations: And finally, while cryptocurrencies suffered a major blow in 2018, the underlying blockchain technology got to see some major highs. Blockchain integration is expanding into administration, into banking, healthcare, power management, education, farming and several innumerable other sectors. This year we saw the first ever Presidential elections being conducted over a blockchain platform, as well as the first baby to get a blockchain-based birth certificate. Educational institutes have begun to issue blockchain-based degrees, land records and driving licenses are going on blockchain systems - a year of great progress in the way we know blockchain applications to be!

That’s all from 2018, stay tuned with us at Cryptoground for all the latest updates from the world of cryptocurrencies and the blockchain technology in 2019!