'Cryptocurrency' is Now Officially a Word in the Merriam-Webster Dictionary 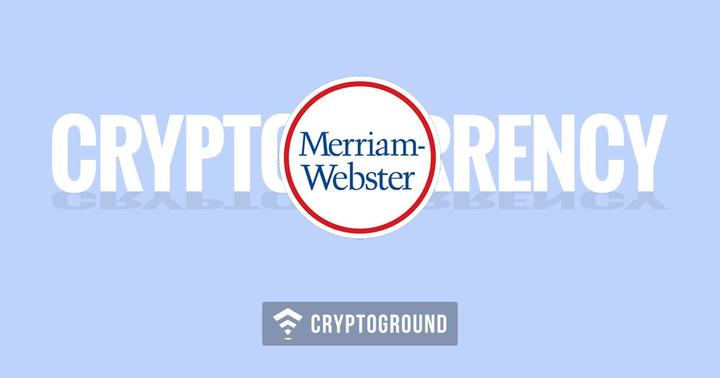 For years the cryptocurrency community has been a close-knit group of tech and finance enthusiasts and these currencies were their best-kept secret. However, over the course of the past year, there was a massive spike in cryptocurrency prices and it became the conversation of the mainstream media. Bitcoin-related conversations are now an everyday conversation - something you’d discuss over the dinner table, or the water cooler. In another major boost for the mainstream emergence of cryptocurrencies, the word ‘cryptocurrency’ is now a part of the Merriam-Webster Dictionary!

The Merriam-Webster Dictionary, in it’s latest update, has added 850 new words - and cryptocurrency finally gets some love from the literary community. Apart from Cryptocurrency, ‘Initial Coin Offering’ too, has been included in the dictionary. Moreover, words such as Bitcoin and Blockchain have also found their place in the Merriam-Webster dictionary now.

The Merriam-Webster Dictionary defines cryptocurrencies as any form of currency that only exists digitally, that usually has no central issuing or regulating authority but instead uses a decentralized system to record transactions and manage the issuance of new units, and that relies on cryptography to prevent counterfeiting and fraudulent transactions.

While this may seem like a small thing to most people, this is actually a major step forward when it comes to bringing the currency to the everyday man. Cryptocurrencies are no longer something that only people in the fin-tech industries are a part of. It has broken all barriers and become something which a large number of people from across the world are investing in. From cash-rich America to African nations which don’t even have a proper banking infrastructure - the cryptocurrency revolution has become a global phenomenon.

In addition to introducing these cryptocurrency related words, the popular startup buzzword ‘unicorn’ too has been added to the Merriam-Webster Dictionary now.

“The language doesn't take a vacation, and neither does the dictionary. The words we use are constantly changing in big ways and small, and we're here to record those changes. Each word has taken its own path in its own time to become part of our language—to be used frequently enough by some in order to be placed in a reference for all. If you're likely to encounter a word in the wild, whether in the news, a restaurant menu, a tech update, or a Twitter meme, that word belongs in the dictionary,” the Merriam-Webster Dictionary stated.