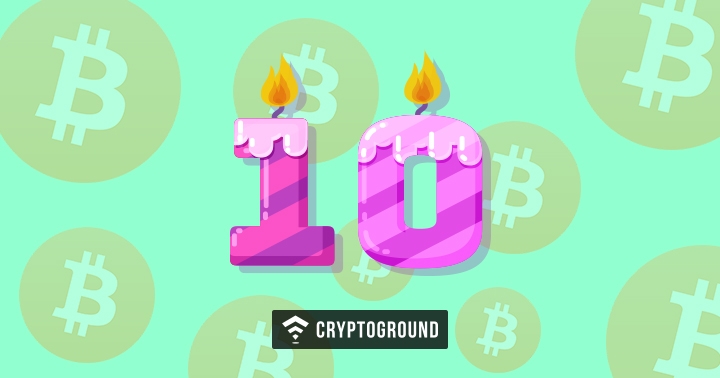 It was on the 31st of October, 2008, that the anonymous Satoshi Nakamoto first published the Bitcoin White Paper. A revolution was kickstarted on that day - and ten years later, it continues to have a major impact on the global economic order.

Over the course of the past 10 years, Bitcoin has seen a major evolution - from being a document that was discussed among a few members of the tech community to rising in prominence and being discussed over dinner-table and water-cooler conversations to being discussed in Parliaments around the world!

While there will always be the debate of whether Bitcoin could actually replace cash, or is it possible to attain a Bitcoin-based economy, or even if Bitcoin can truly be a ‘global currency’, the fact that Bitcoin has managed to stay afloat for 10 years - and rise in popularity year after year is a testament to its success.

One must however note, that 31st of October 2008 was the first time anyone ever heard of ‘Bitcoin’. It was still a concept at this point in time - and appeared in its actual form in January 2009. Let us take a look at the past, the present and the future of cryptocurrencies and see what Bitcoin has achieved in the past 10 years - and where it is headed.

It is important to understand the historic context of the time when the Bitcoin Whitepaper was launched. 2008 was a year that most people working in the world of finance and economics would like to forget. The Lehman brothers had crashed, starting off a series of events which eventually led to a global economic crisis. Tens of thousands of people across the globe lost their jobs and several countries faced a tough time.

A purely peer-to-peer version of electronic cash would allow online payments to be sent directly from one party to another without going through a financial institution.

A system which would allow the transfer of money without the need of a bank. The ‘genesis block’ of Bitcoin was solved on the 3rd of January 2009 and 50 Bitcoins were released into the circulation. A total of 21 Million Bitcoins were created which have to be ‘mined’ over the years. Mathematical calculations indicate that it will be the year 2140 by the time the last Bitcoin is mined. On 11th of January, Nakamoto sent 10 BTC to Hal Finney, a scientist - which was the first ever Bitcoin transfer. Bitcoin didn’t have a value till 5th of October 2009, which was when transactions started. The price of 1 Bitcoin on 5th of October was $0.00076 per BTC.

On 12th of December, 2010, Satoshi Nakamoto announced that he is no longer involved with the project and took a four-year hiatus, only to appear once again in 2014, claiming that the news of his identity having been discovered is false. Nakamoto disappeared once again and hasn’t emerged since. Nakamoto’s identity remains unknown.

A decade after the world first heard of Bitcoins, the cryptocurrency has gone through a journey of some major ups and downs. Bitcoins, which started off at a price of $0.00076 ended up hitting an all-time high of $19,700 over the next ten years. 2017 was perhaps the biggest year for the cryptocurrencies - but much has happened before that too.

Bitcoin hit several milestones - $1, $10, $100, $1,000 and $10,000 - each celebrated with greater vigour than the previous. However, it was marred by several controversies too. Cryptocurrency exchanges being hacked, the speculations that markets are being rigged by ‘whales’ and governments going strict on cryptocurrencies and Initial Coin Offerings. China banned cryptocurrency trading in their country last year, leading to a major collapse in the price. Moreover, another major allegation is that instead of using Bitcoins as virtual money, people are using it as an asset for trading. A number of ICO-related frauds also added to the loss of credibility.

Talking of the world today, 2017 and 2018 have emerged as two of the biggest years for Bitcoin, for reasons right and wrong. In 2017, the world witnessed that Bitcoins has an immense capacity for growth. However, in 2018, the reverse was observed. While the currency celebrates it’s 10th birthday, it is also gearing up to face its first year-on-year loss of 2018 in November.

2018 has been a year of bearish momentum as the markets have been on a slow collapse throughout the year. The price fell from the high of $19,700 to $6,300 as of this writing without showing any major sign of growth. Looking at the brighter side of things, however, this year saw two of the biggest names in the crypto-world gearing up for an IPO, a sharp rise in the number of Bitcoin ATMs around the world - as well as the entry of several high-profile institutional investors into the cryptocurrency and blockchain markets.

While it is almost impossible to predict the future of Bitcoins - one can safely assume that the next decade is going to be an even more challenging one than the previous one. By the time we celebrate the 20th anniversary of Bitcoin, it would have faced several legal and governmental challenges. The tussle between banks and bitcoin is also likely to continue - and ICOs are most certainly going to get stricter guidelines. Assumptions about the future are vague, so we’ll just wait and watch. For now, all we can do is to sit back and celebrate the 10th birthday of Bitcoin. Happy Birthday, Bitcoin.