Top 10 Expectations from the Cryptocurrency Ecosystem in 2019 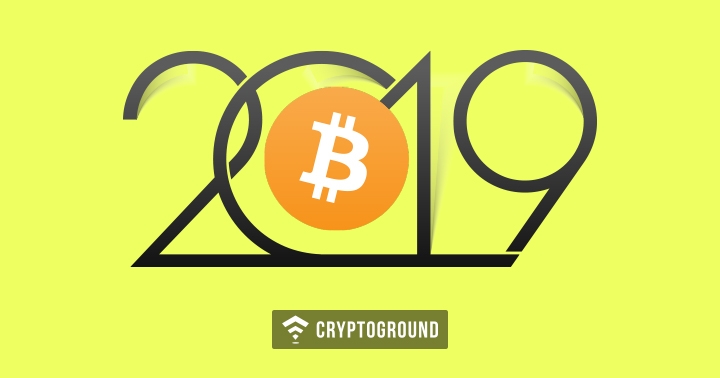 2017 was a great year, 2018 a rather forgettable one. Nevertheless, both the years are now behind us and a new year has just begun. With this new year, come new hopes and new expectations. Now that we're a week into 2019 and all the hype and festivities around the new year have slowed down, here’s a list of the top 10 expectations that every cryptocurrency enthusiast has from the markets over the next three hundred and fifty-eight days.

The following are the top 10 expectations from the cryptocurrency markets. Please note that they are not listed in any order of importance, as we consider all of them to be equally important for the growth of crypto markets in the year to follow.

One of the biggest hopes from the year is that 2019 will be the year we get to see the bulls in action once again, helping the price of Bitcoin recover. The currency reached an all-time high of $19,700 in late 2017. From there, it fell to a low of $3,190 in December 2018. Over the course of a year, Bitcoin has gone through a major slowdown.

However now that we are in 2019, there’s an anticipation in the markets that now that the prices have tanked, large-scale buying is about to begin any time now. This is bound to help the prices grow as growth attracts growth! While a number of investors have left the markets, crypto bigwigs such as Mike Novogratz and Brian Armstrong continue to remain optimistic about the state of crypto markets in 2019.

#2: A Safe Year for Crypto Markets

Another major expectation from 2019 is that it will be a safer year for cryptocurrency markets compared to the past few years. 2018 has not only been the year where we saw the crypto markets go through a huge fall - but it was also the year that we saw the biggest crypto-heist in history as the Coincheck hack resulted in $530 Million being wiped out of the cryptocurrency markets. There were attacks on Bitgrail, Zaif, Bithumb and a number of other cryptocurrency exchanges over the years resulting in hundreds of millions of dollars being lost over the course of 2018.

In addition to security of the cryptocurrency exchanges, in 2019, the crypto markets should also see a decline in scams the likes of which are prevalent on social media asking people to send cryptocurrencies to an address in exchange for a large amount being sent over to them. Then there are ponzi schemes and pump and dump scams, cryptojacking and a number of other crypto-related threats which need to be quashed over the year. With awareness levels rising, it is anticipated that in 2019, crypto-related crimes would see a decline.

Perhaps the biggest expectation this year is that of regulatory clarity. Governments across the world have begun to take a serious notice of the crypto economy and have begun to set up committees and bodies which have been coming out with regulations regarding cryptocurrencies. However, the concept seems rather alien to many nations and committees spent a major part of the past few years studying cryptocurrencies and the underlying technology. It is expected that in the year 2019, these governmental bodies would come out with better regulatory policies surrounding cryptocurrencies.

In addition to the legal status and regulations, taxation seems to be another pressing issue around the world. Governments around the world have finally begun to get the hang of how to tax cryptocurrencies - and under what heads would they be taxed. It is expected that in 2019, government bodies would bring out more clarity with regards to how they plan to tax cryptocurrencies.

Fake Initial Coin Offerings (ICOs) and ICO scams boomed in late-2017 and the first half of 2018 as the cryptocurrency markets soared. This led to millions of dollars being scammed from unsuspecting investors who bought into the concepts pitched by these scammers. Sometimes, these ICO scams were in the name of investment schemes promising guaranteed returns.

The Securities and Exchange Commission of the United States (SEC), as well as a number of other watchdog authorities from across the world have been keeping an eye out for such scams and have been sending them cease and desist notices over the years. The US SEC even came up with a mock website showcasing how ICO scams websites look like and how to stay safe from ICO scams. These ICO scams actually hurt the credibility of legitimate ICOs. With awareness levels rising, we hope that in 2019, these ICO scams would reduce.

All through 2018, Bitcoin Exchange Traded Funds (ETFs) were a controversial matter of discussion put against the Securities and Exchanges Commission. With major names and market heavyweights such as BlackRock and Gemini rallying for getting Bitcoin ETFs listed on the markets, the SEC managed to keep this idea at bay all through the year, citing that the markets are not yet ready for Bitcoin ETFs.

However, considering that the SEC has been postponing their final call on the matter for quite a long time - it is expected that they will give a decisive verdict on the fate of the ETFs in the months to follow. As the demand for Bitcoin ETFs grows louder in the crypto-community, it will be interesting to see what the SEC decides. Nevertheless, we expect to be a major story of 2019.

A major expectation from 2019 is that of the rise in cryptocurrency adoption. As awareness levels rise - and as cryptocurrency payment platforms become easier to use and more accessible, adoption levels are expected to soar in 2019. To be honest to our readers, this is something we expected to happen in 2018 - and while we did see a number of adoptions happening, it wasn’t really satisfactory.

Bitcoin in itself is getting more accessible: 2018 was a great year for cryptocurrency ATMs, which doubled in number this year - rising from some 1900 ATMs towards the end of 2017 to over 4,000 ATMs by the time 2018 ended. With Lightning Network gaining traction at a rapid pace, the speed of Bitcoin transactions is rising while the cost of transactions continues to fall. To add to that, a number of startups are working towards making it easier for users to pay in cryptocurrencies. It will be interesting to see what 2019 holds for cryptocurrency adoptions.

Now this may be a long shot, but given that this was almost achieved in 2017 as the combined market cap of the cryptocurrency markets went beyond $800 Billion, it is quite possible that given a strong enough bull-run, the markets may once again boom to such highs - and even cross the much awaited trillion-dollar mark.

In order for this feat to be achieved, however, it is essential that retail investors as well as institutional investors come together. Most believe that in order for a bull-run to be triggered, retail investors need to take the lead and their active participation would then intrigue the interest of the institutional investors. A trillion-dollar market cap has been predicted by many market pundits in the past, who hope that the cryptocurrency economy will boom once again - however, the bigger question is, will that be possible in 2019?

Ethereum, which has gone through a number of ups and downs over the years, had been a constant second to Bitcoin for quite a long time. Over the past year however, it has slipped to the third position a couple of times - as Ripple has proven to be a strong adversary. Nevertheless, Ethereum is back to the second spot as of this writing, but the currency has much bigger challenges ahead, most notably - the shift to the Proof of Stake algorithm.

While the currency is currently mined using the Proof of Work algorithm, where a large number of people compete for a block, which is a more energy intensive process, Ethereum is soon set to move to a Proof of Stake system, where blocks would randomly be allocated to miners (who would now be known as validators) based on their stake (ETH holdings). Their ETH holdings would be a leverage and if found validating a fraudulent transaction, would be taken away from them. The move to Proof of Stake will also decrease the energy consumption by 99%.

2019 might just be the year of Ripple. While 2017 was all about the 36,000% boom in Ripple’s price, the Ripple team spent most of 2018 expanding overseas and tying up with various organizations. The company has also been reported to be testing pilot projects with money transfer giants such as Western Union.

Ripple has been expanding not only in the mainstream markets - but in developing regions as well. The company is setting up partnerships with banks all over the world, and have been pretty successful in teaming up with a number of players in the Middle East and Asia regions, as well as in the Asia-Pacific and North American markets. In 2019, the platform is expected to grow even bigger and become the numero uno choice for remittance transfer over the blockchain network.

Ripple’s cryptocurrency (XRP) is also expected to perform well in the markets - having already surpassed Ethereum twice to occupy the second spot in cryptocurrencies by market cap, XRP is now down to the third spot once again. However, it looks like this race is far from over - and the battle between Ripple and Ethereum will continue over 2019.

Last but not the least, another major benefactor in 2019 would be the entire stablecoins market. We have already witnessed stablecoins boom in 2018 because of the price fluctuations - and a number of new stablecoins have come out in the markets. The likes of USDC and GUSD now give Tether, the largest name in the markets a competition. In 2019, it is expected that the market domination of Tether will get a major challenge from these new players.

Also Read: Everything You Want To Know About Stablecoins

Moreover, people had their doubts in stablecoins for various reasons - primarily wondering if they actually hold the funds they are claiming to hold. However, with the likes of Circle, Gemini and Coinbase backing stablecoins, it is expected that stablecoins will be taken more seriously than ever before in the year to follow.

Stay tuned with us on Cryptoground for all the latest news updates and stories from the world of cryptocurrencies and the blockchain technology!